Understanding ‘Layman’s Terms': What This Phrase Means and How To Use It

When you’re enthusiastically explaining one of your interests, it can be easy to get carried away and assume that the other person knows all the specific terminology, until they finally say, “Hey, I didn’t understand the last five minutes of this conversation.” This is where you switch to layman’s terms. If you’re explaining something in layman’s terms, you’re using simple language and avoiding jargon. 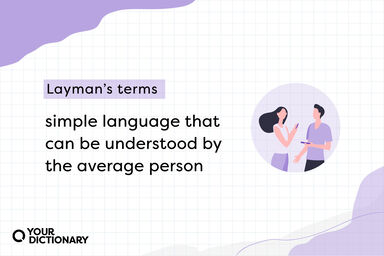 Layman’s terms means simple language that can be understood by the average person. It’s synonymous with “plain English” and refers to taking the perspective of someone who isn’t an expert. Speaking in layman’s terms can mean omitting any unknown jargon, defining scientific terms or avoiding slang.

As an adjective, lay initially meant "non-clerical," thus a layman or layperson was someone who was not part of the clergy or had a profession that was not religion. Layman evolved to refer to a person who was uneducated or non-professional, and it eventually evolved to refer to regular people who are not experts or professionals in a field.

Layman’s vs. Laymans vs. Laymen’s

Layman’s terms is the proper spelling of the phrase. Remember that it’s layman singular, not laymen. Imagine a single, regular man who doesn’t know the lingo, and you’ll use the expression correctly.

Keep in mind that it is the possessive layman’s because you are speaking in the words of a layperson. Laymans is incorrect, as the plural of layman is laymen.

You will almost always see layman’s terms preceded by the preposition in or the verb using. You can use this phrase at the beginning of a sentence, at the end or anywhere in the middle.

If you’re in doubt, ask yourself whether you can substitute plain English or simple terms in place of layman’s terms and still have the sentence make sense.

Seeing and using layman’s terms more often can help you get the hang of using the phrase regularly.

If you are writing or speaking, your goal is communication. Whether you’re doing technical writing, talking to someone outside your field or hanging out with your friends, you want other people to understand you. Speaking or writing in layman’s terms helps you communicate clearly.

In most cases, people are not offended by the expression layman’s terms. The evolution of the phrase means it doesn’t indicate a lack of intelligence or other negative traits. However, there are a couple of situations where it may be considered impolite or insensitive.

Speaking to Someone Else in Your Field

If you are speaking to someone who professes to be an expert in your field and you tell that person you will explain it in layman’s terms, you are effectively saying that person isn’t actually an expert. This could offend your listener. In general, avoid using the expression layman’s terms with coworkers.

While layman’s terms is a generally accepted idiom that doesn’t refer to an actual layman, the phrase does still create a bit of a bias toward only men. If you want to be more inclusive and avoid sexist language, it may be worth considering switching to layperson’s terms.

Communicate With Your Audience

If you’re communicating clearly and allowing your audience to ask questions, you don’t really need to be too worried about putting things in layman’s terms. However, it becomes more important in more professional capacities, like writing user manuals or giving informative speeches.