Nowadays, having someone at your "beck and call" means that they answer your text messages right away, or they're ready to pick up your favorite iced coffee whenever you ask. In the Middle Ages, the phrase "beck and call" referred to a servant doing a master’s bidding — though the request was usually more significant than making a Starbucks run. 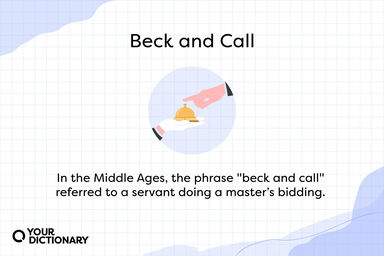 The Royal Origins of 'Beck and Call'

Have you ever curled a finger at someone to “come here” or tilted your head just so to call them closer? You’re closer to a Medieval king or queen than you thought! Monarchs and masters in the Middle Ages would "beckon" (or the shortened “beck”) their servants. If the servants failed to respond with this gesture, the master would then "call" — hence, the servant being at one's "beck and call."

Think of it as a modern “text and call.” When someone fails to respond to your text, you may consider giving them a call (unless the thought of a phone call makes you shudder).

Times When You’re at Someone’s Beck and Call

If you’ve ever worked in customer service, you know what it’s like to be at someone’s beck and call. For example:

'Beck and Call' Has Been Around for a Minute (or Two)

"The Muses doe attend upon your Throne,
With all the Artists at your becke and call
The Sylvane Gods, and Satyres every one,
Before your faire triumphant Chariot fall:
And shining Cynthia with her nymphs attend
To honour you, whose Honour hath no end."

James Usher, a 17th-century Irish bishop, used the phrase in a sermon from his collection titled Eighteen Sermons Preached in Oxford, 1640 to describe a sinner's devotion to the devil.

"... for the wicked God will use no such restraint: Satan shall use them at his pleasure: both in soul and body they shall follow him at his beck and call."

"Beck and call" has plenty of modern applications as well. In 2014, satirist and author Margaret Atwood used the phrase in a New York Times opinion piece titled "Are Humans Necessary?"

"To understand Homo sapiens' primary wish list, go back to mythology. We endowed the gods with the abilities we wished we had ourselves: immortality and eternal youth, flight, resplendent beauty, total power, climate control, ultimate weapons, delicious banquets minus the cooking and washing up - and artificial creatures at our beck and call."

What About 'Beckon Call'?

Have you been scratching your head and thinking "I'm pretty sure it's supposed to be 'beckon call'"? You wouldn't be the only one. Not only does "beckon call" make plenty of sense (you're beckoning and calling), it's not an unpopular way to write this phrase.

However, the actual phrase is "beck and call." Writing it as "beckon call" is an example of an eggcorn — a phrase that sounds identical to another when spoken out loud, and only appears incorrect when written out. Say it however you want in conversation, but make sure you write it as "beck and call!"

The next time you have someone at your beck and call, enjoy the royal feeling that comes with the phrase's history. But don't go too far with it — the 21st century is quite a ways off from the Middle Ages! How many more colloquialisms and idioms do you use every day, and do you know where they come from?