It's a Dog-Eat-Dog (Not Doggy Dog) World: But Why Are Dogs Involved?

A doggy dog world may sound like an absolute dream (or nightmare if you’re a cat person). However, as pleasant as a doggy dog world might be, the expression is actually “dog-eat-dog world.” A less pleasant image, for sure, but that’s sort of the whole point. 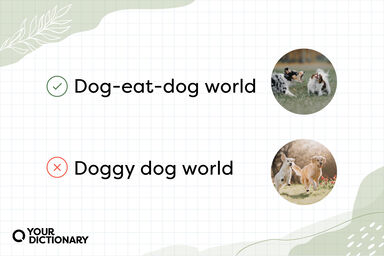 What Does ‘Dog-Eat-Dog’ Mean?

“Dog-eat-dog” is an idiom that applies to people who are ruthless and will do anything to get ahead. A dog-eat-dog world is one in which everyone is out for their own personal gain, whether or not their success hurts other people. The expression is synonymous with an “every man for himself” or “survival of the fittest” mentality. Basically, it’s Darwinism in action — the strongest comes out on top, and a Doberman typically wins in a fight against a chihuahua.

Does the Dog Eat the Dog, or Not?

The origins of this idiom can be traced back to ancient Rome — as early as 43 B.C., in the writings of Roman scholar Marcus Terentius Varro. In De Lingua Latina (The Latin Language) he recorded the Latin proverb "canis caninam non est" or “a dog does not eat the flesh of a dog.” According to this proverb, even a dog has its limits.

The meaning of dogs not eating each other continued through the 16th century, as seen in the essay Bellum Erasmi by Erasmus where he wrote, “one dogge eatethe not an nother.” In 1732, Historian Thomas Fuller wrote in Gnomologia, “Dogs are hard drove when they eat dogs.” This brings us a little closer to a world where the dog eats the dog, but it was not until the 19th century that the expression we all know and love — well, maybe not love, but use — first appeared.

The Dog DOES Eat the Dog

So how did we get from proverbs about dogs not eating other dogs to its opposite: “dog eat dog”? Quite simply, there isn’t a definitive answer, but a variation where the dog does eat the dog was recorded in The Examiner on December 5, 1813.

All the trade and commerce we are to have is among one another: if any body makes money, he must make it, not by his enterprise in foreign commerce, but out of his own countrymen. “Dog eat dog,” is now our commercial motto and practice; no duties being collectable from foreign commerce, it is very clear, that all the money wanted by government must be produced by taxes.

While we don’t have an exact answer as to why the dog went from not eating the dog to eating the dog, it appears that by the time the 20th century rolled around, “dog-eat-dog” was here to stay.

Some people mistakenly say “doggy dog world” instead of “dog-eat-dog world.” The reason for the confusion is simply that if someone is speaking quickly it’s easy to mishear “dog-eat-dog” as “doggy dog,” which is both understandable and an infinitely more pleasant image than cannibalistic canines.

Additionally, in 1993 Snoop Dogg released a single called “Doggy Dogg World,” so that could have something to do with the mixup (and it certainly didn’t help matters).

Sometimes you come across words and phrases that just make no sense. Make sense of these nonsense words and more with the following articles: