Uncovering the Origins of 'Letting the Cat Out of the Bag'

“Don’t let the cat out of the bag,” you warn your friend after spilling a juicy secret. Rather than being alarmed at the thought of a sweet little kitty stuffed into a sack, she nods in understanding. Why do we use such an odd expression to describe keeping a secret — and where did it come from in the first place? 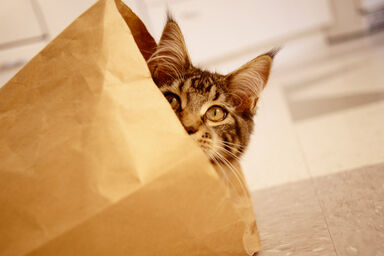 “Letting the cat out of the bag” means that you’ve revealed a secret that was supposed to stay hidden. It’s an 18th-century English idiom that makes perfect sense to native speakers but may sound bewildering to those who are worried about the cat. The phrase’s origin is even more bewildering, as no one really knows where it came from. However, there are some interesting theories that shouldn’t stay secret at all.

One theory has to do with a “cat o’nine tails” — a whip with numerous lashes that often had metal or glass embedded in the leather. This medieval torture device was primarily used on ships to punish sailors for getting out of line.

Legend has it that “letting the cat out of the bag” was the process of taking out the cat o’nine tails from the bag it was stored in. A nice story, but there’s no evidence of a cat o’nine tails being stored in a bag (literally anything would be a better option) and that’s no explanation for the phrase’s connection to divulging a secret.

A second theory concerns the even older idiom of “a pig in a poke,” referring to buying something without inspecting it or being scammed by a seller. Poke meant bag, which pigs were typically sold in during the 16th century.

Some people believe that “letting the cat out of the bag” refers to a buyer returning home with their brand-new pig (without checking out the little swine first) and, to their horror, finding that they’d been sold a cat instead. It’s another intriguing tale, but easy to debunk — if you’ve ever tried to put a cat in a travel carrier, much less a bag, you’d know that there’s no way to confuse a pig with a furious, snarling, dagger-clawed cat. (And if your pig does resemble said beast, don’t buy that pig.)

When in doubt, heap some etymological blame on writers. The first mention of “letting the cat out of the bag” came from a review of a cat-themed book in 1760:

“We could have wished that the strange genius, author of this piece, had not let the cat out of the bag; for it is such a mad, ranting, swearing, caterwauling puss, that we fear no sober family will be troubled with her.” - Review of The Life and Adventures of a Cat from The London Magazine: or, Gentleman’s Monthly Intelligencer, April 1760

The phrase appeared a year later in the 1761 economics guide Every Man his Own Broker: or, A Guide to Exchange Alley, amidst more animal-related financial jargon (bulls and bears):

Term generally begins a few days before the drawing of the lottery, when those who have contracted to take, or are already possessed of, more tickets than they can possibly hold, in the language of ’Change-Alley, begin to open the budget, or to let the cat out of the bag; and these may be not improperly stiled, the bulls plaintiffs; and the opposite party, who have agreed to deliver a quantity of tickets without being possessed of them, the bears defendants.

It’s hard to say whether these publications were merely reflecting a well-known colloquialism, or whether it was invented on these pages. However, after the 18th century, “letting the cat out of the bag” was officially synonymous with “telling a secret you shouldn’t be telling.”

Cats and Bags in Any Other Language

It seems like the idiom should be unique to the English language (which has its share of unique idioms, like the similar-meaning “spill the beans”). But many other languages refer to revealing secrets as cats in bags — and some have their own twists on the expression.

They Make Sense When You Think About Them (Sort of)

If you're still curious about weird sayings involving cats, learn whether kitty-corner or catty-corner is the correct term for something placed on a diagonal. Want to learn more about other odd-sounding idioms? Learn more about phrases you say every day with: