What Is a 'Blue Moon' and Why Does Something Only Happen Once In It?

You might know a blue moon as something for Sinatra or Elvis to sing about or as a cold beer to crack open on a summer night. But what exactly is a blue moon? Is it an actual astronomical phenomenon, or just a figure of speech? While you’ve likely heard the expression “once in a blue moon,” you may be less familiar with what it means. 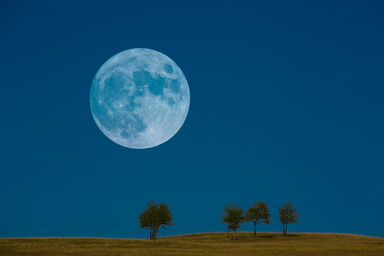 So, What Is A Blue Moon?

In 1937, the Maine Farmer’s Almanac defined a blue moon as “the third full moon in a season of four full moons.” Typically, there is one lunar cycle per month and 12 in a year. However, instead of a standard calendar year, the almanac goes by the “tropical year” which lasts from one winter solstice (around December 20th) to the next. The lunar cycles are grouped by season or every three months, and a blue moon occurs when there is an additional full moon in a three-month cycle. You can usually expect to see a blue moon approximately every two or three years, but occasionally there can be two in a year.

A popular misinterpretation is that a blue moon is the second full moon in a month because of an error in the July 1943 edition of Sky & Telescope magazine. In an article, amateur astronomer Laurence J. Lafleur discussed blue moons citing the 1937 almanac, but he didn’t really explain all the finer details. As a result of his error, this explanation has become the most popular but it is regarded as folklore by experts.

Is a Blue Moon Actually Blue?

No, a blue moon is not actually blue, but a blue moon — and any moon, for that matter – can sometimes appear to have a faint blue tint. However, this only occurs on rare occasions when there is an unusual amount of dust in the air, such as after a volcanic eruption, forest fire or dust storm. In these instances, the dust particles diffract red lighting and give the moon a blue-green hue.

Where Did the Term 'Blue Moon' Come From?

The first written use of “blue moon” was in a pamphlet from 1528 — so technically it was a "blewe mone" — by Wiliam Roy and Jeremy Barlowe.

Yf they say the mone is blewe / We must beleve that it is true / Admittynge their interpretacion.

In this context, “blue moon” is meant to be a ridiculous statement that only gullible people would believe. How and why the expression evolved from “ridiculous” and to “never” to “rare” is unclear. What we do know is that in 1821, “blue moon” was used to mean “rarely” in the book Real Life in London.

How’s Harry and Ben? – haven’t seen you this blue moon.

Meaning of 'Once in a Blue Moon'

In modern usage, the idiom “once in a blue moon” means “very rarely” and is used synonymously with “every once in a while.” It’s not quite as extreme as similar idioms like “when pigs fly” or “when hell freezes over” because if something happens once in a blue moon, it actually does happen, just not frequently.

Exactly How Often Is 'Once in a Blue Moon'?

Just as an actual blue moon only typically comes once every few years, the expression “once in a blue moon” means that something happens occasionally but with a lot of time in between. There is no precise measure of time for “once in a blue moon”; context is key. Generally, when you say something only happens “once in a blue moon” it is understood to mean “only in special circumstances.” It can also range from “every so often” to “almost never” or be used as hyperbole to indicate that there’s a long stretch of time between events.

Add these words and idioms to your vocabulary to make conversations a little more interesting, even if you only use them once in a blue moon.