Who Is Charley and Why Is Your Leg Cramp Named After a Horse?

When you’ve got a searing, stabbing pain pulling on the muscles in your leg, two words come immediately to mind: Charley horse! Who is Charley, and why is he doing this terrible thing to you? There’s a reason why we say this odd phrase and not “My leg is turning inside out” or “Ow, ow, please make it stop, ow" (although you might say that, too). 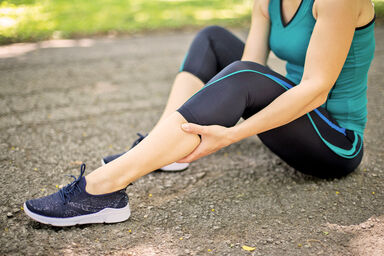 Blame It on Baseball

Even if you’re not a baseball fan, you probably use baseball slang all the time. Ever refer to an educated guess as a “ballpark” or a change in plans as a “curveball”? “Charley horse” is no exception. Baseball players have been using the phrase to describe that severe tightening in their calf muscles since the late 19th century. But while most experts agree that the phrase comes from America’s national pastime, they’re torn on exactly how it came about.

Try to walk with a charley horse. Do you resemble an old, hobbling horse? You and Charley both. According to baseball legend, Charley was an elderly horse on the grounds crew of the 19th-century White Stockings (changed to the White Sox in 1904) who had a hard time dragging equipment around the field. If a player got a sudden cramp or muscle spasm that kept them from walking or running, their teammates would call them “Charley the Horse." Shortstop Jack Glasscock is credited with coining the nickname, so he can share the credit with old limpy Charley.

A second theory names Joe Quest, another baseball player from the 1880s, as the father of the phrase. Having received a tip on a racehorse named Charley, several White Stockings players placed their bets on the surefire winner — all except Quest, who refused to do so. Just as it seemed Charley was about to pull out the win, his hind leg cramped and he lost the lead. An ebullient Quest gloated for the rest of the day about “your Charley horse” and proceeded to tease his teammates when an injury would slow them down.

Possibly the only theory where “charley horse” is a nice tribute instead of a mocking nickname is in the case of Charles Radbourn. The pitcher was known as one of the hardest-working players in 19th-century baseball, earning him the nickname “Old Hoss” — in fact, he still holds the record for pitching the most wins in a single season. But his legendary pitching led to some equally legendary cramps, possibly connecting “Charlie Hoss” to “charley horse.” It’s not as likely as the first theories, but it’s fun to consider. (Old Hoss was also the first person to give the middle finger in a photograph, so he’s already put his mark on surly pop culture history.)

There’s no denying that “charley horse” is a cuter way to describe a leg cramp than “leg cramp.” It’s such a widely accepted term that it’s a common medical diagnosis. But “charley horse” isn’t the only medical phrase that sounds a lot nicer than it feels.

The next time someone’s howling in pain as their leg cramps up, you can do the most helpful thing possible: Tell them why a charley horse is a charley horse! (Just kidding. Don’t do that. Help them stretch and get them a banana.) For more intriguing facts about English colloquialisms, check out: