Phonetic Spelling: Guide to What It Is and How It's Used

Phonetic spelling is a tool for pronunciation. It involves writing out words according to how the letters and syllables are spoken. It doesn't represent an alternate way that words can be spelled in written communication, but rather simply provides a guide for correct pronunciation. 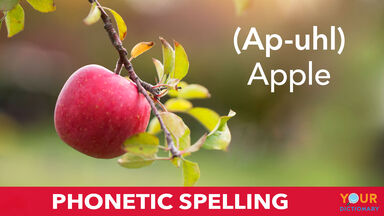 Phonetic spelling is invaluable for those who are learning to speak a new language or who find themselves needing to pronounce hard-to-say names or other words in their own language.

In order to write out words based on how they are pronounced, you'll need to use a phonetic spelling guide that provides ways to write the various sounds that different letters make. You can use a phonetic symbol for each sound, or opt to utilize IPA symbols.

The symbols below are used to indicate common vowel sounds in the English language. Each symbol is used to represent the type of sound marked in bold in the "sounds like" column. The IPA symbol for that vowel sound is given in the third (right) column.

When words are transcribed into their phonetic spelling, dashes are used to separate syllables. Sounds that are stressed can either be bolded or written in capital letters, which is the option used below. Review the list of words below for a few examples of phonetic spellings and IPA transcriptions.

When you look up a word in the dictionary, it will show you one or more common phonetic spellings for the term. There are also some free online phonetic spelling converter tools you can use.

If you are learning to speak English as a second language (ESL) or if you frequently do public speaking that involves pronouncing unfamiliar words, a print guide to the IPA can be a useful tool. The IPA for Language Learning: An Introduction to the International Phonetic Alphabet is a good option to consider.

Now that you are familiar with phonetic spelling and IPA symbols, use what you have learned to improve your pronunciation skills. From there, explore the difference between pronunciation and enunciation so you'll be prepared to clearly articulate your words in addition to pronouncing them correctly.