Knowing when to use like or as can get confusing as you explore similes and comparison sentences. The key to differentiating the two is understanding how each word functions. Understanding that function can help you untangle their usage. 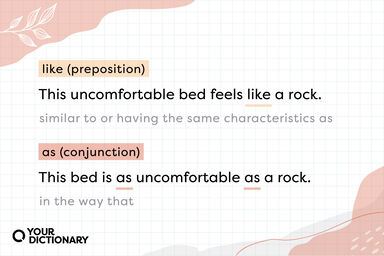 Like and as overlap when making comparisons and forming similes. In comparison sentences:

Even though these definitions are similar, the difference in parts of speech are the keys to understanding how to properly use like and as.

Prepositions show the relationship between two nouns or pronouns in a sentence. In the case of like, that relationship involves similarity. All the usual rules for using prepositions apply to like in this case, but the most important thing to remember: You must be comparing two nouns when using like.

A conjunction connects two clauses to form a single sentence. Other common conjunctions include and, but and or. While like compares nouns, as typically compares verbs and adjectives.

A simile is a figure of speech that involves comparing two unlike things using like or as. Unlike regular comparisons, similes are generally more poetic and designed to create vivid imagery, but the same rules still apply.

How To Remember the Difference Between ‘As’ and ‘Like’

On the fly, you might not have time to diagram a sentence or figure out whether you’re comparing nouns or verbs. An easy trick to remember the difference: If you can use the way in place of the word, you should use as. If not, you probably want to use like.

Along with its use in comparisons, like has a whole bunch of other meanings.

Other Forms of ‘As’

As also has a wealth of other uses. What’s tricky is that many of these also take the form of conjunctions.