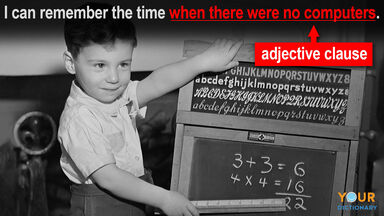 What Is an Adjective Clause?

Now that you've gotten a basic understanding of adjective clauses and what they look like, it's time to learn how to find them. Adjective clauses typically have a few different components.

In a sentence, adjective clauses:

Each of the adjective clauses begins with a relative pronoun. This connects it to the noun being described, which comes directly before the relative pronoun in the sentence.

Subject and Verb in Adjective Clauses

Each adjective clause also contains a subject and a verb, all of which work together to describe the original noun being modified. For example, the clause "which many people adore" contains the subject people and the verb adore, yet it is not a complete sentence by itself. Instead, its job is to provide more information to describe the noun chocolate in the sentence, "Chocolate, which many people adore, is fattening."

For cases where the sentence wouldn't hold the same meaning without the clause, the adjective clause is called an essential clause.

Example: I don't like children who eat ice cream with their hands.

In this case, the adjective clause gives essential information to describe which children the speaker doesn't like. If you got rid of that clause, the sentence would simply say, "I don't like children," which is very different from not liking messy children who eat with their hands! One quick way to pick out an essential clause is that an essential adjective clause does not require any additional punctuation.

A non-essential adjective clause, on the other hand, gives an extra description that is not strictly required to understand the writer or speaker's intent.

Example: The kitten, which was the smallest of the litter, finally found a foster home.

Adjective Clauses in Use

Dive into a few more examples of adjective clauses. See if you can determine which ones are essential and which are non-essential as you review them. Ask yourself, is the information necessary to the meaning of the sentence? Is punctuation required?

Hopefully, you were able to pick out that numbers 3 and 4 were non-essential adjective clauses.

Adding adjective clauses to your writing is a good way to provide additional detail about the nouns and pronouns in your work. This extra description will enrich your writing and help the reader understand your message more clearly. When you know the relative pronouns and how to distinguish between essential and non-essential clauses, you'll have no trouble identifying adjective clauses and punctuating them correctly in your writing. With all this talk of clauses, this may also be a good time to refresh your memory on independent and dependent clauses.