Adjectives That Start With O

Adjectives that start with "o" are more common than you might think. You might even say that they are omnipresent. Get a list of several adjectives that begin with "o" and their definitions. 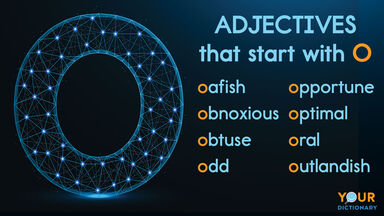 adjectives that start with O
Advertisement

We can't possibly fit all the adjectives that start with "o" in this list, but this selection should get you off to a good start in making your descriptions more vivid — as you'll see in the short story below.

Adjectives That Start With Oa-Om

Start your search for the perfect "o" adjectives off with 25 words beginning with oa- to om-.

Adjectives That Start With Op-Ou

You are on your way to building an outstanding vocabulary. Now, it's time to learn adjectives that begin with op- to ou-.

Knowing adjectives is good, but being able to use them in a sentence is even better. Explore these 10 sentences using "o" adjectives.

Once you've read through the example sentences, take a look at the accompanying short story, which uses at least 30 outstanding adjectives that begin with "o!" The use of that many "o" adjectives in one tale may be a tad out of the ordinary, but it’s certainly original!

The old woman walked home in an odd mood considering the meeting she’d just had. She’d always been optimistic, but this kind of optimism, in the face of such a situation, bordered on outrageous or even obscene.

With so many payments outstanding since her husband’s death, the ostentatious home they’d built together was about to be taken away. The opulent life she lived was about to end.

“How could the bank manager be so obtuse?” she wondered. All these years, he’d seemed so obliging, so friendly, so helpful, and now suddenly, he’d become so cold and official, objectionable, obnoxious. She was a sweet, little, old lady, after all? How could someone be so harsh and unseeing?

“I warned you about him,” her son would say when she told him the news. He’d always said the manager was an “offensive, odious, oily, obese oaf,” but only when he was trying to be nice. “Just because he owns half the town and has his lackeys in every corner, he thinks he’s omniscient and omnipotent. Well, he’s got another thing coming."

In the safety of her living room, the old woman sat down and sighed. Then, picking up the newspaper, she realized the source of her odd sense of optimism: She had everything she needed to pay off the bank. She’d only need to get rid of some things she’d never liked to begin with.

When he started making his fortune, you see, her husband had become obsessed with the work of an obscure modern artist, buying up original prints left and right. He said he admired the mix of opaque acrylics and translucent watercolors.

She’d always been opposed to such frivolity, but she would never have begrudged him the occasional indulgence. Besides, they weren’t that expensive.

Now, reading the headlines of the Arts and Entertainment section, she saw that the painter and his unorthodox techniques had not become obsolete like she thought they would. He had, in fact, become world-renowned, and his original works of art were worth tens of thousands of dollars apiece.

She’d always been respectful of, and obedient to, her husband, and for a moment, she felt a twinge of doubt, as though selling his beloved paintings would dishonor his accomplishments. Then, a completely opposite thought came to her. The idea of getting rid of the paintings she disliked had never occurred to her until this most opportune moment. It was as though her husband were still providing for her even after his death. She had only to be observant enough to see the provision all around her.

The old lady went to bed that night with the windows open, feeling the warmth of the night air and the security of the home she would love for years to come.

When you are writing, it can be easy to get caught using the same adjectives over and over. Expanding your vocabulary can make writing more fun. Plus it's always good to improve your impressive vocabulary. Keep your exploration of adjectives going through adjectives that start with "p."