Adjectives That Start With T 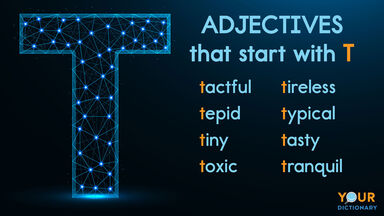 adjectives that start with T
Advertisement

There are simply tons of "t" adjectives in the English language. Get started with this selection of 50 descriptive words in adjective form. It would be terrific if you were tenacious enough to create your own list of "t" adjectives, too.

25 Adjectives That Start With Ta-Th

Begin exploring adjectives that start with "t" in alphabetical order. These early alphabet selections provide a great starting point for building your vocabulary.

25 Adjectives That Start With Ti-Ty

Keep strengthening your adjective vocabulary by exploring even more adjectives that start with "t" by going even further down the list in alphabetical order.

Review the sample sentences below for inspiration on how to incorporate adjectives that start with "t" into your own writing or conversations.

To further enhance your skills with using adjectives, take the time to explore some adjective phrase examples.

Sound Off: T-Sounds in English

The letter "t" has three major sounds in the English language.

No matter how it’s pronounced, it’s clear "t" is a fundamental and important letter in the English language.

The letter "t" has a rich history as a useful letter. The ancient Phoenicians and other tribes used "t" as the marker or signature for people who were illiterate and unable to sign their own names — just as other cultures have used the letter "x" for the same purpose.

Although the letter "t" originally meant "mark" or "sign," it was altered to represent our current letter centuries later by the Ancient Greeks. Certainly, "t" is no longer a stand-in for a signature, but it remains one of the most useful and popular letters in the English language.

The letter "t" has come a long way, hasn’t it? Does a more thorough study of the evolution of the English language seem tantalizing to you now? Consider moving on to adjectives that Start with "u" as you embark on a study of some of the remaining letters of the alphabet. Then, focus on finding descriptive words that convey certain meanings, such as adjectives to convey tone, feelings and emotions.