Adjectives That Start With V

There is no shortage of adjectives that start with "v." Exploring descriptive words that begin with this letter is a fabulous way to boost your vocabulary. Learn the definition of some interesting words that start with "v," then review some sample sentences to get ideas of how they're actually used in writing or conversations. 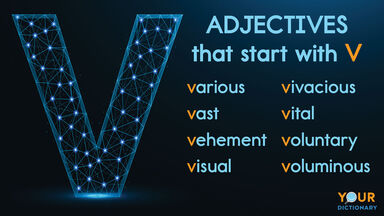 adjectives that start with V
Advertisement

This selection of adjectives that begin with "v" provides a wide variety of words that can be used to further describe nouns that you are writing about or discussing.

V Adjectives That End With -ous

There’s a bit of a twist with the "v" adjectives listed below. You’ll notice that many of them end with the suffix -ous, which means “full of” or “having qualities of.” Keep this in mind as you continue to add to your own personal list of adjectives!

Wondering how to work these words into your English language communication? These example sentences illustrate ways some of the above terms can be used.

Now that you have a list of adjectives that start with "v" in your back pocket, you can practice using some of them with this quick exercise. This exercise uses only adjectives that appear on our list of those ending in -ous. Choose an adjective from that list to complete the sentence or answer the question. Some adjectives from the list may be used more than once. Check your answers in the next section.

Have you answered the practice exercises? Check your work here. The correct responses to the practice items above are listed below.

Historical Tidbits About Words That Start With V