Adjectives That Start With Y 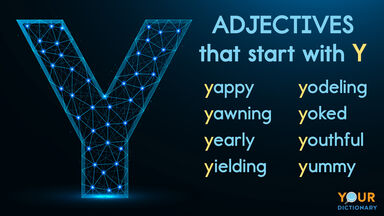 adjectives that start with Y
Advertisement

These adjectives beginning with "y" need very little introduction. They're full of character and life. Using them can enhance your ability to communicate effectively. Explore 50 adjectives that start with "y" in alphabetical order.

Explore these adjectives that begin with "y," with an eye on how you can use them in your own writing or conversations.

Keep exploring even more interesting adjectives that begin with "y." These descriptive adjectives are sure to enhance your writing and conversations.

To get to grips with your "y" adjectives, these example sentences show you the words in action.

For more help with sentence structure, you can also check out some of our sentence variety examples.

Get Descriptive With Adjectives