Guide to Compound Adjectives: When and How To Use Them

Adjectives are the words that help to describe or modify nouns, but sometimes a simple adjective won’t provide the oomph that you need. This is where compound adjectives can help. A compound adjective is formed by combining two or more words to modify a noun or pronoun, and they are extremely versatile. 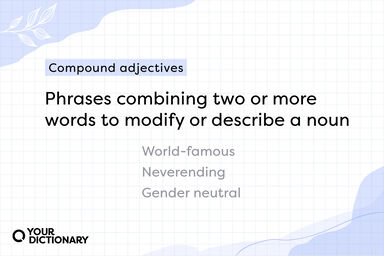 A regular adjective is a single word that modifies or describes a noun or provides information about it. Compound adjectives serve the same function, but they are phrases made of two or more words put together to describe or modify a noun.

How To Use Compound Adjectives

Despite the hyphens and multi-word construction, compound adjectives can be treated like regular adjectives. You can place them before the noun that you want to modify:

You can also put them at the end of a sentence and treat them as a predicate adjective:

The beauty of compound adjectives is their versatility in both usage and construction.

These are by no means the only ways to form compound adjectives. With a little creativity, you can invent compound adjectives of your own for any occasion or purpose, like having a Fridays-only dessert or wearing your comfy-but-presentable sweatpants. Remember that, regardless of the phrase’s length, all the words must modify the noun.

A hyphen is one of the best ways to spot a compound adjective, but not all compound adjectives are hyphenated. Sometimes, a writer may omit hyphens as a stylistic choice. For example, some writers use quotation marks or italics in place of hyphens:

Some compound adjectives have also turned into single words due to common use, like under-cooked which is often seen as undercooked. Others may appear as two separate words with an implied hyphen, like gender-neutral often being written as gender neutral.

Knowing when to hyphenate largely relates to whether the adjective phrase is used before or after the noun. When a compound adjective is placed before the noun or pronoun that it modifies, the adjectives in the phrase should be hyphenated, as in “a full-time job.” The hyphenated phrase provides clarity as it means that the two words together describe job. Without the hyphen, a “full time job” would describe a “time job” that is “full.”

When a compound adjective is placed after the noun or pronoun that it modifies, the phrase should not be hyphenated, as in “a job that is full time.”

Keep in mind that not all adverbs end in -ly, like well, ill and better. Those words do sometimes require a hyphen. For these words, the general rules apply. If the compound modifier appears before the modified noun or pronoun, use a hyphen. If it comes after the modified noun, omit the hyphen.

You probably see compound adjectives every single day without even realizing it.

Try to answer the questions on your own, then check your answers against the answer key located below the questions.

Don’t peek at the answers below until you have completed the practice exercises above.