Even if you're just getting started in Latin, it's nice to have some adjectives under your belt. That way, you can describe the nouns you're learning to use in your sentences! Check out these Latin adjective lists that include adjectives for colors, sizes, quantities, and appearances. You'll also find Latin adjectives we still use in English today. 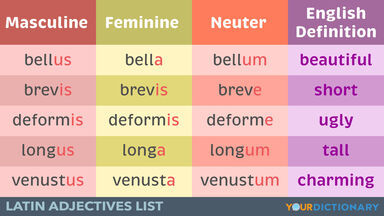 You may be surprised to find that many Latin color words are still in the English language in some form or another. Read through these Latin adjectives in the nominative case for color to see how many you already know.

There are many ways to describe the size of a noun in Latin. Some of these words appear in everyday English as well — for example, the English word "massive" comes from the Latin massa, which means "having a large mass."

The Latin term for "emotion" is animi motus, which literally means "movement of the mind." Use these Latin emotion adjectives to describe how someone feels. You may even recognize some familiar roots!

Latin Adjectives for Quantity and Amount

When you want to discuss how much or how little of something there is, you need a Latin adjectives list for quantity and amount. Take a look at these adjectives in all three grammatical genders to find the word you're looking for.

Well-Known Latin Adjectives in Current Use

Some Latin adjectives in current use are so common, we forget they’re actually Latin words at all. You'll find many of these words used every day in the legal profession.

There are lots of Latin words found in the English language today. Many English words incorporate Latin roots to create meanings based on original Latin words.

In English, verbs are conjugated to match the noun in subject-verb agreement, but adjectives don't change. However, in Latin and Latin-based languages (such as Spanish or Italian), adjectives must agree with the nouns they describe.

It's not as complex as it seems. Once you know the part of speech you're describing with your Latin adjective, you can conjugate it correctly. You can also determine the Latin adjective's declension by determining what type of noun it is modifying.

Latin may seem like a dead language. However, many of the romance languages are based on Latin, and the English language also borrows from the Latin language quite a bit. Take a thorough view of Latin vocabulary words that you can integrate into your writing. Or, if you’re ready to expand beyond Latin adjectives, take a look at common Latin words and phrases we use in English.