List of Adjectives to Describe Someone's Feelings, Emotions and Tone

The English language would be very dull without adjectives. They dress up nouns whenever there is a need to punch things up a notch. With an adjective, that heartache someone is feeling is no longer just a heartache, it's a crippling heartache or debilitating heartache that is tearing them apart, or maybe just a small heartache that they'll get over quickly. Whenever you're speaking or writing, use words to describe feelings, emotions or tone to get your point across with a little extra oomph. When it's time to do so, call in the big dogs: the adjectives. 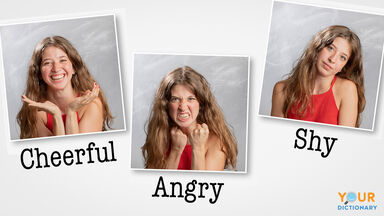 Adjectives help express the tone, feelings and emotions of words by accentuating the point. Considering the example of heartache above, it's not hard to see that it would be difficult to quickly ascertain how severe (or minor) a person's heartache is without the use of adjectives. Of course, context clues would eventually reveal more, but adjectives allow situations to be described succinctly.

A person's feelings can sometimes be observed or experienced visibility. For example, the way a person smiles can reveal something about how they are feeling, such as that they're sad, mad, happy, or ecstatic. Feelings tend to house emotions, often amplifying a particular situation.

Some feelings are clearly positive or negative, while others depend on the rest of the sentence to make the meaning clear. Sharing a list of feeling words with kids can help youngsters learn how to express how their feelings. Grownups sometimes also need help.

Emotions and feelings are very similar. In fact, the definition of feeling is to have an emotion. The only difference is that emotions tend to refer to that which isn't tangible or easily seen, while feelings are sometimes observable.

It may be possible to guess that someone is either sad or happy, but emotions aren't always expressed. Rather, they are sensed. Check out these examples for positive and negative emotions, as well as ones that depend on context.

A person's tone is often an indicator of their feelings or emotions, but it wouldn't be described with emotion or feeling words. Instead, words that describe tone focus on how the person's disposition or mood is conveyed. For example, describing tone can help clarify whether a statement or story is positive is negative.

Discover some examples of words that convey positive and negative tones, along with some tone terms that could be positive or negative, depending on the context in which they are used.

You don't have to commit all of these words to memory in order to use them in appropriate situations. This printable is a full list of words to describe emotions and feelings, as well tone. This is only a selection of the thousands of adjectives in the English language, but it should be enough to help you verbally convey a certain tone, feeling or emotion!

It can be difficult to find just the right words to describe feelings, emotions or tone. You never want to come across sounding trite or use an adjective that's too weak to express the gravity of a particular situation. However, it's important to use adjectives in moderation. Don't douse every noun in sugar. Instead, sprinkle a little sweetness on the situations or words that will truly benefit from a tasty addition.

Using adjectives properly is a bit like building your vocabulary. The more you read, the more you'll discover new words and meanings, including adjectives, and how they are used to highlight emotions.

Hopefully, these tips will help you not only use words to describe feelings in your own conversations or writing but also teach them to your children or students. Using adjectives appropriately can enhance conversations and writing. While adjectives are on your mind, take the time to discover the many different types of adjectives. Then get to know other types of descriptive words, such as adverbs and gerunds.