What Is a Proper Adjective? 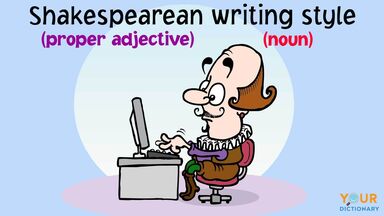 My student Timothy has a real future as a playwright. He has a wonderful Shakespearean writing style.

To further illustrate, consider that Canada is a proper noun because it is the name of a specific country. Nouns that are from Canada are referred to as Canadian, so the word Canadian is a proper adjective.

Proper adjectives are far more specific than regular adjectives. They are often used to succinctly describe something. Using proper adjectives allows writers to get their point across in fewer words than it would take to do so using a proper noun instead.

Consider: Which is more succinct?

Writers tend to prefer to use the first option, as it conveys the meaning in fewer words than the second option.

If a writer is too verbose, readers will only trip over their words and grow frustrated or bored. Building up your adjective vocabulary to accurately and directly describe things with adjectives related to important proper nouns can improve the clarity of your writing.

Another Use for Proper Adjectives

Proper adjectives can also be used in a metaphorical sense. Academics often use proper adjectives formed from the proper names of important thinkers. It's a helpful way to indicate certain ways of thinking and certain theories.

Their tragic romance was of Shakespearean proportions.

The proper adjective in this sentence succinctly indicates an intensity and sadness almost as desperate as the infamous Romeo and Juliet. No one would think the romance was literally taking place during Shakespearean times. They would, however, get the allusion to impending doom.

Examples of Proper Adjectives in Sentences

Let's look at a few more examples of proper adjectives and the nouns they modify:

How to Create a Proper Adjective

You can create a proper adjective in several ways.

Have you ever heard someone make up a proper adjective on the spot? It might not be correct, but you'd probably understand what a person meant if the individual described their supervisor's actions as Hitleresque or Hitlerish.

Explore a few examples of proper adjectives and the proper nouns from which they are formed.

Practice your proper adjective skills with these practice questions. Try each one on your own, then check your work using the answers below.

Check answers to the practice questions against the solutions below.

That wasn't too hard right? When you see a capitalized word, ask yourself if it's a person, place or thing, or if it's modifying a person, place or thing. If it’s a modifier, then it’s a proper adjective. These descriptive words can add tremendous wonder to our writing. They beef it up in a way that helps us explore new insights and scenes. Why not continue this study on adjectives with a lesson on demonstrative adjectives? The opportunities abound to add color and flourish to your writing. All it takes is a well-chosen adjective.