What Is an Adjective Complement? 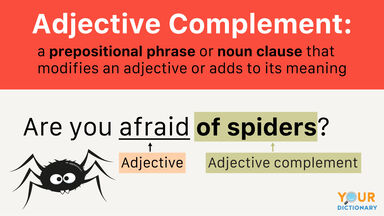 What Is an Adjective Complement?

Adjective complements can take the form of a noun clause or a prepositional phrase.

Adjective Complement as a Noun Clause

A noun clause is simply two or more words that function as a noun. It should have a subject and a verb, and, since it takes the place of a noun, it’s a dependent clause and cannot stand alone. A noun clause starts with the words “that," “how,” “if,” and the wh- words “what,” “when,” “why,” "who," and "where."

Examples of noun clauses include:

Adjective Complement as a Prepositional Phrase

A prepositional phrase starts with a preposition — such as “with,” “about,” “on,” or “in” — and is followed by a noun, pronoun, noun phrase, pronoun phrase, or noun clause.

Examples of prepositional phrases include:

Are these making sense? Deepen your understanding of this aspect of English grammar by reviewing even more adjective complement examples.

Other Types of Complements

Adjectives are popular parts of speech, but you also have subjects, verbs, adverbs, direct objects, and more. So, you may not be surprised to learn there are also other types of complements in grammar. Three other common types are: subject complements, object complements and verb complements. In the example sentences below, each complement is bold and the part of the sentence it modifies is underlined.

Don’t let these technical terms deter you from one central theme. An adjective complement enhances an adjective in order to provide further detail. That’s all there is to it! One of the simplest examples above was, “I will be happy when I get married.” What’s the adjective in that sentence? Happy. Why is this person happy? Because they are getting married. Be sure to make use of these clauses and phrases in your writing whenever they apply; they’re fantastic methods of elaboration. Now that you know how to use adjective complements, start adding some more descriptive adjectives to your vocabulary.