What Is an Adjective? Explanation, Usage, and Examples

An adjective describes or modifies a noun, which is a person, place, thing, or idea. Without adjectives, there’s not much difference between a serene vacation and a disastrous vacation. But using adjectives is a little more complicated than adding pretty words into your sentence. 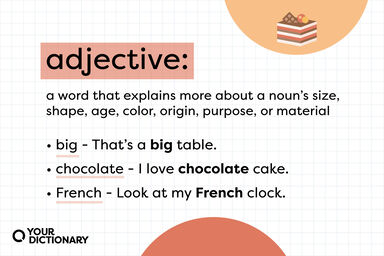 What Is an Adjective?

As one of the eight parts of speech, adjectives provide further information about a noun. Specifically, they explain more about a noun’s size, shape, age, color, origin, or material.

Examples of adjectives modifying the same noun (table) include:

And you’re not limited to just one adjective per noun. When using cumulative adjectives that describe different parts of a noun, you can use any combination of adjectives (just make sure you’re putting them in the correct order).

What Do Adjectives Do?

It’s easy to say that adjectives’ main job is to make your writing more engaging, because it’s true. But they’re not just sentence decoration — each type of adjective is an important part of speech.

But adjectives can also modify pronouns.

When an adjective comes after a noun and a linking verb, such as is, becomes, or seems, it’s a complement. Not every complement is an adjective, but some adjectives can be complements.

Subject complements modify the subject of a sentence.

Object complements modify the object of a sentence.

Adjectives answer questions such as "Which one?" "How many?" and "What kind?" to help describe a noun. For example:

When there’s no comparison because a noun is the highest degree of an adjective, use a superlative adjective (adjective + -est, or sometimes the word most).

How To Identify Adjectives in a Sentence

You know what adjectives do — but how can you spot one? There are a few tricks to finding adjectives in a sentence.

Many English adjectives are actually different parts of speech with certain suffixes added to them (such as adore into adorable).

These suffixes usually mean “having the quality of,” and they include:

Look at Adjective Placement in a Sentence

Although adjectives typically come before a noun, there are lots of places to find them.

More Adjective Examples and Ways To Practice Using Them

There's a lot to learn about adjectives. Explore all the different types of adjectives, then use activities and worksheets to put all that knowledge to use.