An adverb clause is a group of words that function as an adverb in a sentence. Adverb clauses can be used to add explanatory detail to your writing and explain how or why things happen. To identify adverb clauses, you'll need to understand what an adverb does as well as how a clause is formed. Explore the basics and review examples of different types of adverb clauses. 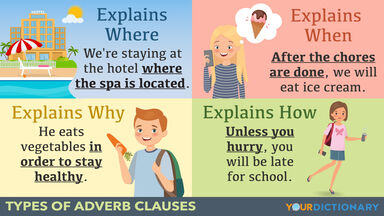 What Is an Adverb?

An adverb is a part of speech that describes an adjective, another adverb or a verb. Adverbs give more information about how an action was performed. In general, they answer questions like, how, why, where, and when. An adverb can do this on its own, with just one word, as illustrated by examples of adverbs in sentences. Groups of words (phrases or clauses) that function as adverbs can also perform this function in sentences.

In each of these sentences, the bold word or group of words answers the question "how?" and describes the verb "walked."

What Is a Clause?

In reviewing the difference between phrases and clauses, consider the previously listed examples of words being used together to function as an adverb in a sentence.

What Is an Adverb Clause?

Adverb clauses, also known as adverbial clauses, are dependent clauses that function as adverbs. This means that adverb clauses have a subject and a verb and serve the purpose of describing an adjective, a verb or another adverb.

Examples of Adverb Clauses by Type and Purpose

Adverb Clauses That Answer Where

Adverbial clauses often provide information about where something occurs. Use this type of adverb clause when you're trying to explain the location of something so that you're being very clear on the exact place.

Adverb Clauses That Specify When

The adverbial clauses below answer the question when. Use this type of adverb clause when you are discussing time. They are appropriate for when you want to clarify the timeframe in which something will, has or is expected to take place.

Adverb Clauses That Express Why

The adverb clauses below are examples of ones that answer the question why. Use this type of adverb clause when you're providing an explanation of the cause or purpose for something, both of which provide explanations or justifications for the outcome.

Adverb Clauses That Clarify How

While adverb clauses are a little more complicated than standalone adverbs, they are very useful in adding richer detail to your writing by explaining how and why things happen. When you begin to add subordinating conjunctions and dependent clauses to your writing, you add interest by varying the rhythm of your sentences. Layering in important information via adverb clauses helps to create a complete picture for the reader. Explore examples of adverb clauses to get a sense of the many ways these descriptors can be used to improve your writing.