How to Identify an Adverb Clause + Quiz

Adverb clauses provide more information about a verb, adjective or adverb. They're an important part of a well-written sentence, paragraph or story. But how can you find an adverb clause in your reading? Check out these clause modifier examples to learn how to identify an adverb clause, and challenge yourself with an adverb clause quiz. 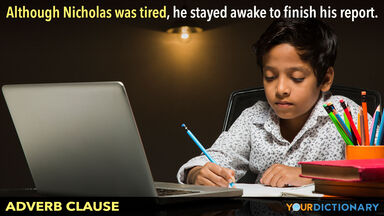 An adverb clause is a group of words that functions as an adverb to answer the questions "how," "how much," "when," "how often," and "where." Adverb clauses begin with a subordinating conjunction, such as after, since or unless. They contain a noun and a verb, but can’t stand alone as a complete sentence.

The easiest way to find an adverb clause is to follow a few simple steps. Use the sentence "We will go to the park after it stops raining."

The clause "after it stops raining" answers the adverbial question "When will we go?" Therefore, it's an adverb clause because it modifies the verb "go" and includes a noun and a verb. If you remove the clause from the sentence, it still makes sense but provides less information.

Now that you know what an adverb clause is and how to spot one, you can easily see how these modifiers convey information. In every adverb clause example below, the clause begins with a subordinating conjunction.

Notice that you can start or end a sentence with an adverb clause. Changing the position of adverb clauses is an effective way to add sentence variety to your writing.

Are you ready for a challenge? Test your knowledge of adverb clauses with a short quiz.

If you'd like more of a challenge, download and print the adverb clause worksheet below. It includes additional grammar exercises as well as a full answer key.

Answers to Where's the Adverb Clause?

How did you do? Check your answers to the practice questions. The adverb clauses are in bold.

Add Flavor to the Action in Sentences

Adverb clause modifiers add flavor to our sentences in so many ways. They add specificity and detail to a piece of writing that makes a series of words feel vivid and alive. Learn more about the difference between adverb and adjective clauses to fill out your dependent clause understanding. You can also check out the differences between phrases and clauses to avoid any potential mix-ups.