How to Use an Adverb Clause

An adverb clause is a group of words that function in the same way as a single-word adverb does. An adverb modifies (or describes) a verb, adjective or another adverb.

The descriptive information that adverbs add typically tells when, where, why, how, and to what extent something happened. Just like a single-word adverb, adverb clauses perform these functions in a sentence. Read on to find out how to use an adverb clause in a sentence. 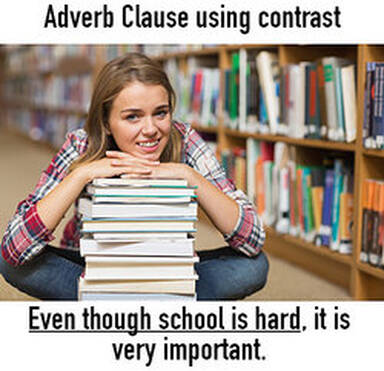 How to Form an Adverb Clause

For example, consider the adverb clauses below:

The subordinating conjunction you choose will help to answer one of the questions that adverbs typically respond to and allow the clause to function as an adverb in the sentence. For example, after explains when something happens, provided tells under what condition something happens, although shows contrast, and because answers the question why.

As you can see, an adverb clause needs three parts: a subordinating conjunction, a subject, and a verb.

Where to Put an Adverb Clause in a Sentence

You can place an adverb clause at the beginning, middle or end of your sentence. For example:

The placement of the clause doesn't change the meaning, so it's often a matter of personal preference where you would like to put it. It should be noted that placing an adverb clause in the middle of a sentence is somewhat unusual in writing. In this position, it serves as an interruption to the main thought, which is more common in speech than in writing.

Here are some more examples of adverb clauses used in a sentence:

Once you know how to form an adverb clause, it's important to remember the punctuation rules so you can create a grammatically correct sentence every time. Doing so will enhance your writing by allowing you to add descriptive detail that explains how, when, where and why actions are performed. This complexity will allow you to share more intricately reasoned thoughts with your reader, so it's worth mastering how to use adverb clauses in your writing.

For more practice, you can check out some Examples of Adverb Clauses to get a sense of the many ways these descriptors can be used to improve your writing.