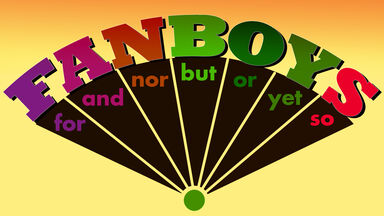 For: Explains a Reason

The first coordinating conjunction in FANBOYS is “For.” It explains a reason or purpose (just like "because"), typically with two independent clauses. For example:

“For” can be confusing because it can also be a preposition (such as in “I bought this gift for you”). But when it’s used to explain why something is happening, it’s a coordinating conjunction.

The second coordinating conjunction in FANBOYS, “And,” adds one thing to another. It can be used to join two nouns, two verbs, two adjectives, two phrases, or two independent clauses. Examples of “and” in a sentence include:

“And” is one of the most common coordinating conjunctions in English. Notice how it connects two of the same part of speech or two clauses with equal importance.

Nor: Presents a Second Negative Idea

When using “nor,” you reverse the verb order in the second clause (such as in “nor does she take notes” instead of “nor she does take notes.”). “Nor” is often used after “neither” (such as “I neither hate nor love to watch TV”) as a correlative conjunction, which is a pair of conjunctions that join ideas.

But: Introduces an Opposing Idea

The fourth FANBOYS coordinating conjunction is “But.” It shows contrast between two words, phrases or ideas of equal importance. Examples of “but” in a sentence are:

When “but” is used for the same meaning as “except” (as in “Everyone but me was invited”), it’s a preposition, not a conjunction. “But” is only a conjunction when the clauses on either side express opposite ideas.

Or: Shows an Alternative

“Or,” the fifth coordinating conjunction in FANBOYS, presents an alternative or a choice. Like “and,” it can be used between two of the same part of speech as well as two phrases or clauses. For example:

Like “nor,” you can use “or” as a correlative conjunction. It joins with “either” (as in “Either you get in the car now or we’ll be late”) as a conjunction pair to connect opposing ideas. Unlike “neither/nor,” “either/or” connects positive ideas.

Yet: Adds a Contrasting Idea

“Yet” is the sixth coordinating conjunction in FANBOYS. It introduces a contrasting idea that follows the preceding idea logically. Some example sentences include:

“But” and “yet” seem interchangeable, and they almost are. “But” brings a tone of finality into a sentence (“I’d love to ice skate, but I don’t know how”) while “yet” implies that an action may be able to change in the future (“I’d love to ice skate, yet I don’t know how.”). Grammatically, you can use one for the other, but the shift in tone makes it worth your time to choose the right word.

So: Indicates a Result or Effect

The final FANBOYS coordinating conjunction is “So.” It indicates an effect, result or consequence from an action in the earlier clause. For example:

“So” can also be used as an adverb, as in “I am so tired.” But it’s not linking two words or ideas together in this case; it’s modifying the word “tired.” Make sure you know how the word is functioning in a sentence before determining its part of speech.

For example: “Television is a wonderful escape, but it interferes with my writing.” Because these are two independent clauses, they must be joined together by a comma and a coordinating conjunction. Leaving out the comma may lead to run-on sentences.

Can You Begin a Sentence With a Coordinating Conjunction?

Another misconception is that it's incorrect to begin a sentence with a coordinating conjunction. While this is a good rule of thumb, it's not a hard and fast rule of grammar as long as your sentence still connects to the sentence before it. For example:

You might want to limit how often you begin a sentence with a coordinating conjunction. However, it's not incorrect to do so, especially if it'll break up a particularly long sentence into more understandable chunks. It’s an effective way to vary your writing style if needed.

You may be thinking “Wait! I know there are more coordinating conjunctions than those seven!” If you’re wondering why words like “however,” “therefore” and “also” aren’t considered coordinating conjunctions, that’s because they’re conjunctive adverbs. Conjunctive adverbs join two clauses with a semicolon or in a new sentence, and modify the first clause with the second clause.

Coordinating conjunctions are the simplest of all the conjunctions to recognize and master. Knowing how they work will improve the quality and complexity of your writing. If you’re ready for different types of conjunctions, there are lots of ways to start. Practice putting each one in its correct place with these conjunction exercises that are sure to reinforce your new grammar knowledge.