What does happiness look like? How does anger smell? Can you taste education? Believe it or not, some nouns aren’t accessible with the five senses. These nouns are called abstract nouns — and even though you can’t see, smell, touch, taste, or hear them, they’re still all around you. 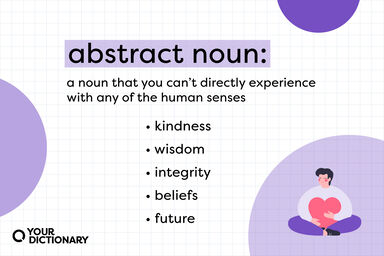 What Is an Abstract Noun?

We define abstract nouns as nouns that you can’t directly experience by any of the human senses. These nouns represent an aspect, concept, idea, experience, state of being, trait, quality, or emotion. You may feel them emotionally, but not with your sense of touch.

Examples of abstract nouns that you may not have considered to be nouns (or abstract) include:

Abstract nouns are similar to abstract art. They’re both hard to define or explain, but when you see it, you know. The word abstract refers to something that exists apart from concrete existence, which is why the term describes nouns that we can't perceive in a sensory way.

Consider how many emotions, attributes, ideas, and events you talk about, and you may be surprised to find how many abstract nouns appear in your writing and conversation every day.

Abstract Nouns for Emotions and Feelings

Abstract Nouns for States of Being

Whether a person’s state of being is temporary or permanent, you can describe it with an abstract noun.

You can use abstract nouns to describe a person’s personality traits or states of mind.

Abstract Nouns for Ideas and Concepts

Abstract Nouns for Events and Experiences

Depending on the noun, they can also be:

You can create many abstract nouns by adding a suffix or making another alteration to a root word (which could be a concrete noun).

For example, the word adult is a concrete noun. However, adulthood is an intangible state, so that word is an abstract noun. Additional examples include:

Recognizing When a Noun Is Abstract

It can be difficult to recognize when a noun is abstract because there are so many words that can function as different parts of speech. The words love and taste, for example, can be verbs or abstract nouns, depending on the sentence.

Sometimes an abstract noun really does seem concrete. Take destruction, for example — when you envision broken buildings, crashed cars, burning fires, and clouds of smoke, it really seems like you can see destruction.

If the difference between concrete and abstract nouns still confuses you, consider these helpful tips.

If the answer is “no” to these questions, congratulations — you’ve got an abstract noun!