Collective Nouns and Their Use Explained

Typically, words that identify more than one person, place or thing have to be made plural in the English language, but that is not always the case. Collective nouns are a key exception. Find out what collective nouns are and review a number of examples. 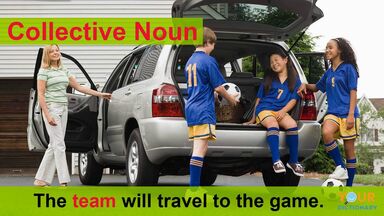 What Is a Collective Noun?

Collective nouns are words that name a group or collection of people or things in a way that the group is discussed as a single entity. Basically, a collective noun is a group noun that refers to units or groups in a collective sense.

Team as a Collective Noun (With Sentences)

For example, the word team is a collective noun. There are multiple individual players on a team, but when discussing something that happens to the team as a whole, the team would be referred to as a single thing.

Parts Within a Collective Noun (With Sentences)

When individuals within a collective noun act individually (not as a unit), you would need to add or replace words to create references to the individuals.

The word team is just one of the many examples of collective nouns for people who are in a group and acting as a single entity.

Collective nouns don’t all refer to groups of people or animals. Groups of other things can also be referred to as a unit.

Nouns in the collective class can be used in either the singular or plural form, depending on the context of the sentence.

Using collective nouns in sentences can be confusing because it's sometimes difficult to discern whether to use plural or singular verbs and pronouns with them. It’s necessary to identify whether the collective noun refers to the group working in unison as a unit, or to members of the group acting on their own.

When to Use Singular Verbs and Pronouns

When the unit is acting in unison, it is appropriate to use the singular form of verbs and pronouns. For example:

Here, the class is referred to as a unit acting in unison; the students are all doing the same thing at the same time.

When to Use Plural Verbs and Pronouns

When the members of the unit are acting as individuals, it is appropriate to use plural forms of verbs and pronouns. For example:

The class (collective noun) members (added for clarity) began their (plural verb and pronoun) homework assignments while waiting for their (plural pronoun) teacher.

The class of students is a unit, but the students are acting as individuals. Each student is doing his or her own homework assignment.

Gradual shifts in the ways words are used have contributed to the formation of this special class of nouns. Now that you’re familiar with many collective nouns and how to use them, review these collective noun worksheet activities to practice and reinforce what you have learned. Consider expanding your overall knowledge of nouns by exploring the various types of nouns.