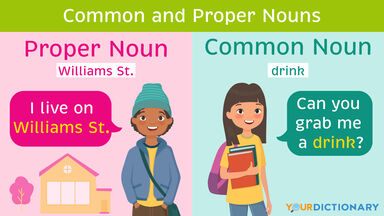 Difference Between Common and Proper Nouns

Now that you’ve seen a few different common and proper noun examples, it’s time to explore each one in a bit more depth.

What Are Common Nouns?

When you think of a common noun, you want to focus on the common part. These are your generic nouns within a sentence. For example, "The boy rode his bike." In this sentence, “boy” and “bike” are generic nouns. You have generic nouns all around you, from your phone to your friends. See a few different examples of generic nouns.

Using Common Nouns in a Sentence

Common nouns can be both singular and plural. Additionally, these nouns are only capitalized when at the beginning of a sentence. Explore a few example sentences with common nouns.

What Are Proper Nouns?

A proper noun functions in the same way as a common noun. It is a person, place, thing, or idea. However, these types of nouns are capitalized.

Proper nouns include the days of the week, the months of the year, towns, cities, streets, states, countries, and brands. Names of people and pets are all proper nouns, too! Notice how your first, middle and last name are all capitalized: they are proper nouns because they indicate a specific, particular person — you! Explore a few examples of other proper nouns.

How to Use Proper Nouns in a Sentence

You use proper nouns in sentences the same way you use common nouns, but they retain their capitalization whether or not they come at the beginning of a sentence. Explore what sentence examples look like with proper nouns.

Now that you know that proper nouns are capitalized in a sentence, you might start thinking every capitalized word is a proper noun. But it's not. You can also find proper adjectives too. Whenever you see a capitalized letter, question whether or not it is a noun. Ask yourself: Is it a person, place, thing, or idea?

The Relationship Between Common and Proper Nouns

It wouldn’t make sense to have sentences with only common nouns because you wouldn’t know exactly what something was. However, you also wouldn’t want to put proper nouns in every sentence. This is especially true if you don’t know who or what something is. So, common and proper nouns are used together in sentences to make them more enjoyable and easier to understand.

For example, it’s easy to say, “that building over there,” if you don't know the name of the building. However, you can also say, “Grand Central Station over there.” Both sentences can convey what you mean. The second one is just more specific.

Practice With Common and Proper Nouns