Common Nouns: Types and Use

There are many types of nouns. Each type serves its own unique purpose in everyday communication, but common nouns are the most basic classification. All nouns that aren't proper nouns (ones that refer to a specific person, place, thing, or idea and have to be capitalized) are common nouns. Discover examples of some of the most frequently used types and how they work. 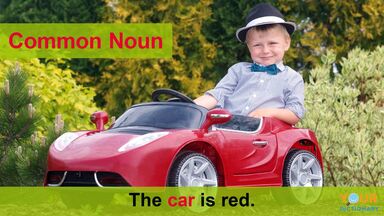 What Is a Common Noun?

The standard definition of a noun is that it names a person, place, thing, or idea. But that's not all there is to a noun.

A noun can refer to anything that is living or nonliving, animate or inanimate. It can also name a place or an abstract idea or concept. Nouns are basic to sentence structure because they, along with pronouns, serve as the subject of a sentence. And, of course, no sentence can be complete without a subject.

A common noun is a word used to name a general item. It is a more generalized version of a proper noun, which names a specific living or nonliving thing, place or idea.

Types of Common Nouns With Examples

There are several types of common nouns. It’s important to be able to recognize and properly use the kinds of common nouns that are frequently used in conversations and writings. This printable list of common noun types is a great reference tool.

Countable nouns can be both singular and plural. They are distinct units that are easily tallied or numbered.

A singular countable noun must be preceded by a determiner. These are words that clarify, such as: a, an, the, that, this, one, our, my, and which. Use a countable noun in a sentence like this:

Uncountable nouns, also called non-countable nouns, are singular only. You cannot use "a" or "an" with them; it doesn't make sense to refer to "a water." However, you can use other words to describe their quantity, like:

Certain quantifiers may be used such as: a lot, any, some, and too much.

You're not trying to count the individual number of units with these nouns. Rather, it's clear an entire group is being addressed as a collective whole.

Concrete nouns represent something physical that can be experienced through the senses. They can be common, proper, singular, plural, countable, uncountable, or collective. Examples include:

These nouns can be tasted, touched, seen, heard, or smelled. They're definitive, specific entities, as opposed to things we can't actually touch, like air or love.

Abstract nouns refer to things that aren't concrete. They cannot be seen, touched, heard, smelled, or tasted. They refer to emotions, ideas, concepts, traits, experiences, or states of being. They can be countable or uncountable. Examples include:

These nouns stand in stark contrast to concrete nouns. We'll never be able to touch or hold them in a literal sense. Here are some example sentences with abstract nouns.

We Live in a Noun World

Most sentences have at least one noun. An exception would be an imperative sentence with an implied subject like, "Leave now!" where "you" is understood. Typically, however, at least one noun is needed to make a complete sentence. Surely, without nouns, all our favorite novels, poems, movies, and plays wouldn't exist.

Expand Your Knowledge of Nouns

Now that you understand what a common noun is, it would be a good idea to continue your noun studies with further review of common and proper nouns. And, when you're ready, draw back the curtains and experience the many different types of nouns in the English language.