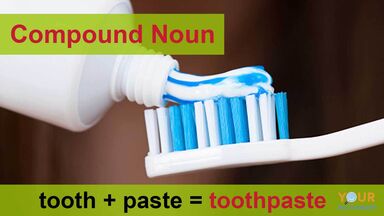 A compound noun consists of two words that are put together to create a single noun. One of the words is usually a noun; however, the other word can be a noun, an adjective or a preposition. Combined, the meaning may or may not relate directly back to the root noun.

Compound nouns can be closed (one word), open (two words) or hyphenated (two or more words connected by a hyphen). Examples of each type of compound noun are:

Compound nouns can be made up of a noun and an adjective as is the case with the word blackboard. Sometimes the compound noun will not have a noun within it at all, as in the word output. Even so, it will still be considered a compound noun, because it took the combination of two separate words to form this new word.

To get in as much practice as you can, try your hand at the first helpful compound noun worksheet. You can try out the sample compound noun exercises here, or download the printable worksheets below for more practice.

How did you do? Here are the compound words you can make with the words above:

Now that you have experience creating compound nouns, you can use this worksheet to match them to their definitions. See how well you know what common compound words mean in a matching exercise.

Read the definitions below. Use the word bank words to create the correct compound word that matches each definition.

Could you match the compound words to their definitions? Here are the answers:

Using a compound noun worksheet or two can aid in the process of teaching compound nouns. However, also remember that students have individual needs and requirements. Therefore, these worksheets will have to be blended in with other teaching techniques in order to ensure a comprehensive education. Use the worksheets along with common and proper noun worksheets in a full lesson on the parts of speech.