Compound Nouns: What They Are and Common Examples

When two or more words join together to make a single word, like keyboard or bookstore, that's a compound word. A compound noun is a type of compound word that is used to designate a person, place or thing. Keep reading to learn more about the different types of compound nouns and common examples of each. 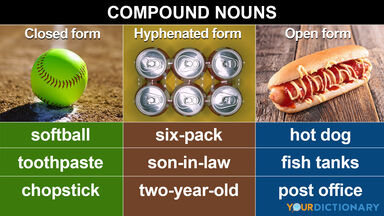 What Is a Compound Noun?

A compound noun is a compound word that functions as a noun. The first part typically states the type or purpose, and the second part states who or what is being named. For example, in the word firehouse, the word "fire" indicates what type of house it is (one for fighting fires). The meaning of the new word is different than either of its parts individually.

Examples of closed form (no space or hyphen) compound nouns in sentences include:

Compound nouns can also be in hyphenated form. These include:

Finally, you'll also find compound nouns in open form with a space between the words. Some examples are:

How to Form Compound Nouns

Depending on the parts of speech used to create the compound noun, the rules for word form can vary as well. For example, the word redhead means "a person who has red-orange hair," but red head means "a head that is red." Take a look at these common combinations that make up compound nouns and general rules regarding the forms each combination typically takes.

Truth be told, there are no rules governing why some compound words are hyphenated, some are closed and others remain open. Like irregular verbs, you simply have to study a word list or consult your dictionary.

In American English, common words are typically closed, and uncommon words often use hyphens or open forms. It's also worth noting that compound nouns that have become commonplace sometimes lose the space or hyphen over time. For example, “on-line” is now online. “Take-out” is now takeout. British/Canadian English typically uses a hyphen. For example, the Shorter Oxford Dictionary uses pot-belly while the American Heritage Dictionary uses potbelly.

The trickiest category for people tends to be the ones with verbs. Some words are more obvious than others (swimming pool, public speaking), but others seem trickier (decision-making or decision making?). The decision to hyphenate or not depends on the style guide you're using, and usually it depends on the particular word. It also depends on whether you're using the word as a compound noun or as a compound adjective, which has its own set of rules.

How do you make these compound nouns plural or possessive? To no surprise, there are no hard and fast rules concerning the plural form of compound words, especially since some hyphens are omitted over time.

Some of the more common rules include:

To make a compound word possessive, you usually add apostrophe + s to the end of the word, as in mother-in-law's car or five-year-old's birthday.

If the compound word is plural, it can get a little strange with two "s" sounds close together, as in fathers-in-law's attire. If you can, it would be better to reword the sentence so the plural compound word does not need to be possessive: the attire of the fathers-in-law.

Compound nouns are slightly different than noun phrases, which are modifier + noun phrases. For example, a hot dog is a type of sausage typically eaten on a bun. It may be hot, but it's certainly not a dog.

The first sentence uses "hot dog" as a compound noun, but the second does not. You can usually tell the difference by carefully reading the sentence context, and by listening to the pronunciation. Compound nouns typically have a stress on the first word ("HOT dog" — the food) while noun phrases have no stress on either word ("hot dog" — a dog that is hot.)

Compound nouns are just one way in which the English language has become richer over time. While your brain is wrapping itself around the subject, take a look at the cousins to compound nouns. Taking the time to familiarize yourself with compound adjectives and compound verbs will help you round out your understanding of compound words.