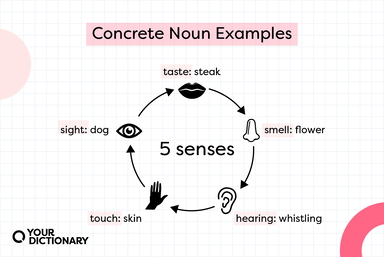 What Is a Concrete Noun?

A concrete noun is a person, place, or thing you experience through one or more of your five senses. If you can’t see, hear, taste, touch, or smell it, it’s not a concrete noun.

Concrete nouns are different from abstract nouns, which are ideas and concepts. People, places, and things can be concrete nouns — but not ideas.

Examples of Concrete Nouns by Sense

Concrete noun examples are everywhere. Although you can experience most of them with more than one sense (you can see, smell, taste, and feel cupcakes, for example), they’re grouped below by their primary sense.

Whether they’re objects in your office or animals described in a book, these concrete nouns are visible.

Can you hear that? It’s the sounds of concrete nouns ringing through the air.

If you can feel a noun using physical touch (not emotions), it’s a concrete noun.

Some concrete nouns smell wonderful — others, not as much.

Although you shouldn’t try to taste every concrete noun, you can describe the ones that do have a taste accurately.

Can you tell which of the bolded nouns below are concrete and which are abstract? (Hint: Watch for context clues that reveal which nouns access the five senses.)

Could you tell the difference between the nouns?