You may not realize it, but you use appositive noun phrases every day to provide more detail in your sentences. Appositives are two nouns that work together, where one identifies or further defines the other. Sounds almost abstract, right? Fear not, as soon as you review these appositive examples, it’ll all make sense. 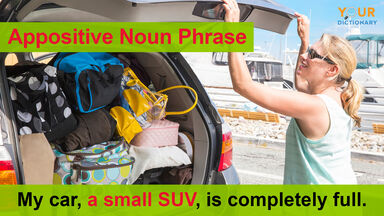 What is an appositive? An appositive is a noun or a noun phrase that renames the noun next to it. It serves the purpose of adding information about another noun.

The sentence is still complete without the appositive. However, adding the appositive (an avid sprinter) presents more information about the other noun (boy).

An appositive can come before or after the main noun, and it can be at the beginning, middle or end of a sentence. It has to sit beside the noun it defines. As a noun phrase, an appositive does not have a subject or a predicate, and so does not express a complete thought.

Don’t overuse appositives in your writing. All it takes is one too many, and a paragraph can become long, cluttered and confusing. Only use them when they can add to the character of the noun and provide more interest to your work.

Are you still wondering, "What is an appositive phrase?" Check out the examples below. The best way to become acquainted with any part of speech is to review examples, then practice using examples appropriately. The appositives noun phrases are marked in bold and the nouns they identify or modify are unerlined.

By reviewing examples of appositives and working them into your own conversations and writing, you’ll be well on your way to total mastery.

Did you notice all of the appositive examples are surrounded by commas? Appositive noun phrases are nonrestrictive, which means they can be left out of a sentence and the sentence will still make sense. For this reason, they should be surrounded by commas when used in a sentence. This indicates the appositive's helpful, but non-essential function. Commas are required for these types of phrases because they function as parenthetical expressions.

The appositive examples above should help clarify what appositives noun phrases are and how to use them. While you're in noun mode, take the time to learn more about other groups of words that function as nouns. Start by learning how to tell the difference between a phrase and a clause. Then, explore what noun clauses are and how to identify them.