8 Fun Noun Games for the Classroom

Noun games in the classroom help students learn and have fun while doing it. Whether your students are focusing on people, places and things, or they’re learning the difference between abstract and concrete nouns, these noun games are appropriate for any grade level. Keep reading for engaging ideas about teaching nouns in the classroom. 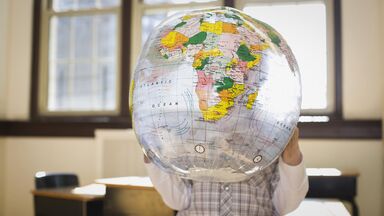 Before playing these grammar games, review the definition of a noun and the different kinds of nouns. If nouns are still a new concept, start with common nouns. If your class is more advanced, you could classify further by proper and common nouns. The most advanced students could categorize the nouns by countable and uncountable, concrete and abstract, and collective.

With this game the teacher may want to help students start thinking about nouns of the world before playing. The game could cover any kind of noun, so it should not be difficult once they get going.

Another version of Globe Trotter uses a stuffed animal and nouns related to things at a zoo or animals. You could also use a sports ball and have nouns from any sport, including where it is played, the spectators, or team names.

Nouns Around the World

Try out a game that quizzes students on the type of noun they’re looking at. With this noun game the teacher has a pile of alphabet flashcards and another set of cards with the words: "person", "place", "thing", and "idea" on them.

Feel free to modify based on your class’s skill level and review needs. A simpler version would just have alphabet flashcards and the students think of any noun that starts with that letter.

There are two ways to play this fun team game.

This noun game starts with the teacher picking a destination.

Another version of the Traveling With Nouns game has the student say a noun that starts with the last letter of the noun from the previous student and not have them repeat each one. This version would probably be easier for a large group. You could also leave out the opening sentence and just have a simple noun game where you make a noun chain.

Sometimes you may want to play noun games that involve individual students or teams. These games are great for small group sessions or independent study.

This individual noun game is easy to play in any location.

Turn a simple list of nouns into an individual game.

Split the class into teams of 3-4 students each. One student will be the recorder, but they will all brainstorm the answer.

You can vary this game by choosing other activities besides sports, or for asking for different parts of speech associated with the activity.

A good team game involves each type of noun.

Students who are having fun are students who enjoy learning. Reinforcing their knowledge of nouns is just one benefit to bringing grammar games like noun activities into the classroom. For more noun practice and grammar fun, check out this list of grammar games that cover parts of speech, parts of a sentence, and punctuation.