Noun Phrases: Definition, Purpose and Use

Noun phrases are groups of words that function like nouns. Typically, they act as subjects, objects or prepositional objects in a sentence. While that might seem tricky to grasp, the best way to understand these useful phrases is to see them in action. Get a clear idea of a noun phrase and how it is used in a sentence through examples. 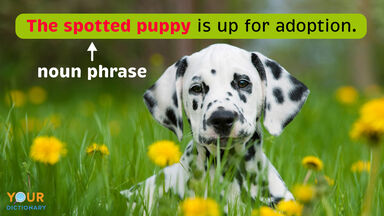 The modifier can come before or after the noun. If it comes before the noun, it's likely to be an article, possessive noun, possessive pronoun, adjective, or participle.

Modifiers that come after the noun include prepositional phrases, adjective clauses, participle phrases, and infinitives.

Purpose and Use of Noun Phrases in Sentences

Noun Phrase as a Subject

To be a complete sentence, a sentence needs a subject. Noun phrases are easy to add in as the subject of a sentence. And they typically provide a clearer picture to the reader of what the subject is.

Noun Phrase as an Object

In addition to needing a subject, you also have an object within a sentence. The objects work with the verb in the sentence like in these noun phrase as object examples.

Noun Phrase as a Prepositional Object

You'll also come across sentences where the noun phrase includes words that act as an adjective. For example, in "the car wash" the word "car" is acting as an adjective for the noun "wash."

Noun Phrase as a Participle

A noun phrase can be used as a to-infinitive to show something that might be a necessity or possibility. Investigate how this works through a few examples.

Noun Phrase as a Prepositional Phrase

Noun Phrase as an Absolute Phrase to a Subject

You can also use the noun phrase as an absolute phrase for a specific subject. Find out how this works by checking out the examples with the noun phrase in bold and the subject in italics.

Nouns and Their Functions

Nouns name persons, places, things, or ideas. Since there are so many of them, they can be grouped into many different categories. Some of the different types of nouns include:

Function of Nouns in Sentences

Sometimes, nouns can also act like an adjective, as in "water heater" where "water" modifies "heater." They can also function as an adverb, as in "she went home" where "home" indicates where she went.

No matter their form or function, noun phrases form fuller ideas. Instead of just talking about a dog, you can add an adjective to that noun and discuss a spotted dog. Instead of just saying they walked into the sunset, you can describe the scene with his laughter ringing through the air. You'll find many writers like to make use of noun phrases. It allows them to paint pictures, including a red-faced woman who found herself in an uncomfortable position.

Given the English language's complex beauty, you may not be surprised to learn there are other types of phrases, including verb phrases and gerund phrases. Investigate phrase examples to learn more about building illustrative sentences that will stick in your readers' minds forever.