A noun quiz tests the student's understanding of nouns and their function in the context of a sentence. Two different level quizzes are provided below to be used according to the level of the students being tested. 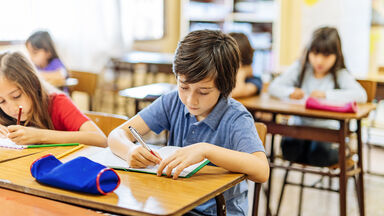 Noun Test for Beginners: What Is a Noun? Quiz

This noun quiz is for students beginning to learn about nouns. Focusing more on the basics of nouns and how to use them, these noun questions cover the fact that a noun is a person, place, thing, or idea. It also covers the difference between common nouns and proper nouns.

What Is a Noun? Practice Questions

Explore a few practice questions from the noun quiz to test your current knowledge. See if you can identify the noun or nouns in each sentence.

Designed for 2nd and 3rd grades, this quiz tests students beginning knowledge of nouns. The quiz itself consists of two parts. In Part A, students are asked to circle all the nouns in 10 sentences. In Part B, students are asked to underline the common nouns and circle the proper nouns across 10 sentences. Simply click on the easy-to-use link to access the free downloadable noun quiz for beginning learners.

Check out the answers to the first few questions on the beginner noun quiz. The nouns in each sentence are in bold. Did you identify them all?

The second quiz available is designed for a more advanced student body. With this noun test, students can expect to be quizzed on additional noun forms, including proper nouns, collective nouns, uncountable nouns, countable nouns, abstract nouns, and concrete nouns.

The advanced noun test has three different sections. The first section has 5 questions covering proper and collective nouns. In the second section, students explore 10 sentences where they must identify abstract and concrete nouns. The final section has 5 sentences full of countable and uncountable nouns. For ease of use, this quiz offers a downloadable PDF version of the advanced noun test. You can print it or save it for later.

After tackling the two sets of noun quizzes provided, students may want to try their hand at some additional practice with this vital part of speech. Select from a huge variety of plural noun worksheets at different levels of skill, or try some collective noun worksheets for practicing this sometimes confusing variation too. Practice makes perfect!