Learning how to use plural possessive nouns is an important aspect of mastering English grammar. This type of noun represents more than one noun (person, place, thing, concept, or idea) and expresses ownership. Discover how to make a noun both plural and possessive, as well as the rules that apply to the use of plural possessive nouns. 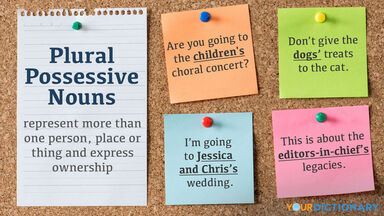 A noun is a person, place, thing, or idea. In English, nouns are most often used as the subject of a sentence (which does the action) and/or the object (which receives the action).

Example sentence - The cat chased the dog around the house last night.

Nouns are either singular or plural, depending on whether there is one or many of the thing(s) in question. Cat is a singular noun. Cats is a plural noun.

Use this plural nouns worksheet for practice forming plurals.

Nouns sometimes need to be written in a way that shows ownership, which requires knowing how to use the possessive case. This typically requires adding an apostrophe followed by an "s" to the end of a word.

There are many examples of possessive nouns, including singular and plural versions. Plural possessives are more complex than singular possessives because most plural nouns already have an "s" at the end.

What Is a Plural Possessive Noun?

Example sentence - We got our cats' beds from the store.

Here, the noun "cats'" is neither the subject (which is "we") nor the object (which is "beds"). Instead, "cats'" is a plural possessive noun, showing that the object of the sentence belongs to one particular group. The beds belong to the cats. There is more than one cat and there are multiple beds. That's the fundamental idea.

How to Construct a Plural Possessive Noun

There are certain basic rules for constructing possessive nouns. These rules are fairly consistent, though there are always a few (or more) exceptions to the rules in English grammar.

Plurals That End in S

Most English plurals end in "s." If that's the case, to make the plural noun possessive, simply add an apostrophe after the "s." Going back to the cats' beds, the singular noun is cat and its plural form is cats. The plural possessive form is cats'. Consider a few more examples.

Irregular Plurals Not Ending in S

Words with irregular plurals that don't end in "s" are made possessive as if they were singular; that is, by adding an apostrophe followed by an "s."

Example sentence - There was a line to the men's room at the children's choral concert.

Both men and children are plural nouns. Since they don't end in "s," their plural forms are men's and children's. Other examples include:

To make a hyphenated or compound noun plural, you'll have to make a few changes. Generally, adding an -s or -es to the first word in the phrase will make it plural. To make it possessive, you'll need to add an apostrophe followed by an "s" to the last word, or just an apostrophe if the last word already ends in "s." For example, if you have had more than one father-in-law and they've all had bad attitudes, you could say "my fathers-in-law's attitudes."

Two or More Nouns Together

When referencing two or more nouns that are acting together, then the plural possessive form requires adding an apostrophe followed by an "s" to only the last noun. For example, Mary and Kelley are college roommates who share a dorm room. You'd say Mary and Kelley's room to refer to their place of residence. They're acting together because the room belongs to both of them.

Proper Nouns That End in S

There are several different types of nouns, though they all consistently follow the plural possessive rules described above. There are different ways to categorize them, and many nouns will fit into several categories. For example, the noun "dog" fits into the common, countable and concrete noun categories.

Now that you've reviewed the rules for plural possessive nouns, put your skills to the test with the practice questions below. On a piece of paper, write the correct plural possessive of each item listed. Do your best to answer on your own before scrolling past the items, then move on to check your work against the answers provided.

Don't peek ahead if you haven't already written down your answers to the practice exercises above. Instead, stop and go back to see if you can get the answers on your own. The only way you'll know if you've really mastered how to form plural possessive nouns is if you take the time to test your skills. Once you have completed the practice exercises, check your work against the answers below.