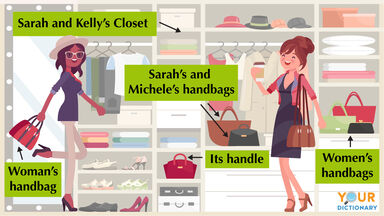 A possessive noun shows ownership of something, like Duke's toy. Its key characteristic is the apostrophe before the "s." For example, the possessive noun "Duke's" shows that Duke is the toy owner. To truly understand how a possessive noun works, check out a few different sentence examples.

Think of the apostrophe as a hook reaching out to take ownership of the nearby object. Without the little hook grabbing onto the "s," the noun is simply plural.

For most singular nouns, you can make them possessive by adding an apostrophe + "s" to the end of them.

You'll use this rule the most, so be sure to pay attention to it. However, there are always exceptions to the rule. If a singular noun ends in "s," you can either add an apostrophe + "s" to the end or just an apostrophe. Both are considered correct. The one you choose depends on how awkward the word sounds with an extra "s" on the end.

Of course, English has some words that are plural but do not have an "s" at the end of them, like "children," "sheep" and "women." These irregular plural words are treated as if they were singular words when making a noun possessive.

Rule #3: It Doesn't Use an Apostrophe

The exception to the apostrophe + "s" is the possessive form of the pronoun it. "Its" does not require an apostrophe to make it possessive. See a few examples of how this works.

It doesn't take possession with "it's" because "it's" is the contraction of "it is." Therefore, when you are showing its ownership, you don't use an apostrophe.

Hyphenated words and compound words can be tricky. Add the apostrophe + "s" to the end of the compound words or the last word in hyphenated nouns. Investigate how you compose these possessives through a few examples.

You may be writing about two people, places or things that share possession of an object. If two or more nouns share ownership, indicate the possession only once and on the final noun in the group. Make sure to add the apostrophe + "s" to the last noun only.

This is the trickiest rule of all, but you probably won't need to refer to it too often. When two or more nouns indicate ownership, but the ownership is separate, each noun gets the apostrophe + "s" to indicate separate possession. The examples may help you to understand exactly what this means.

Without clumping these examples into generic rules, let's discuss a few common words and phrases that often trip people up.

Living in a Noun Nation

There's no denying the importance of nouns. They exist in nearly every sentence, frequently working as the subject of a sentence. Given their popularity, it's only natural they will show possession over other people, places and things. To practice your new skills, have some fun with these possessive noun worksheets. Then, when you're ready, test your knowledge with this possessive noun quiz.