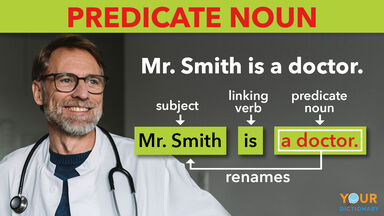 What Is a Predicate Noun?

A predicate noun has two functions in a sentence:

Every sentence has a subject and a predicate. The intransitive linking verb and the predicate noun make up the predicate of a sentence. The other noun is the subject of the sentence.

Only linking verbs can connect predicate nouns to subjects in sentences. There are many examples of linking verbs.

Forms of the verb “to be” include:

Other verbs that may function as linking verbs include:

Since you now understand predicate nouns, you may be interested to learn a bit about predicate adjectives. Adjectives modify nouns, which includes describing them and giving more information about them such as, their composition, their origin, your opinion of them, and their purpose.

Explore Other Types of Sentences

Sentences that include predicate nouns tend to be structured fairly simply. Now that you are familiar with predicate nouns, take the time to explore other sentence structures, including ones that include objects and are therefore more complex. Start by developing an understanding of subjects, predicates and objects. Then, learn more about the different parts of a sentence. Soon you'll be so comfortable writing compound sentences that you'll be ready to move on to even more advanced topics!