Types of Nouns: An Easy Guide to the Different Forms

Nouns are words that refer to people, places, things, or ideas. Under the umbrella term, there are actually several types of nouns. Discover the major classifications of the different types of nouns in English, along with examples, so you can see these types of nouns in action. 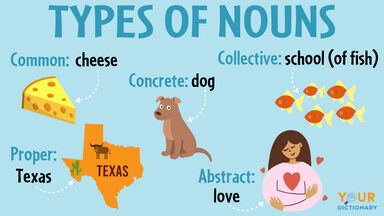 Concrete nouns can be perceived by at least one of our five senses. They are nouns that refer to things that exist physically and can be touched, seen, smelled, felt, or tasted.

More theoretical concepts use abstract nouns to refer to them. Abstract nouns refer to concepts or feelings that cannot be experienced concretely or touched physically. Ideas, qualities or conditions like love, hate, power, and time are all examples of abstract nouns.

A compound noun contains two or more words that join together to make a single noun.

A singular noun refers to one person, place or thing.

A plural noun refers to more than one person place or thing.

Countable nouns can occur in both singular and plural forms. They can be modified by numbers, but also can be paired with quantifying determiners, such as many, most, more, or several.

On the other hand, some nouns are not countable. They can be referred to as uncountable, non-countable or mass nouns. Liquids and powders such as milk, rice, water, and flour are usually uncountable nouns. Other more abstract examples that cannot be counted would be air, freedom or intelligence. Uncountable nouns usually cannot take plural forms.

Material nouns refer to materials or substances from which things are made. Consider the word "cotton." Cotton is an adjective when used in "cotton dress." However, cotton is a material noun when used to describe the crop that is used to make fabric.

There are many noun examples in the English language. For a printable list of the different types of nouns, download the PDF chart below.

A few other types of words can function like nouns when they appear in sentences.

Personal pronouns take the place of nouns when referring to people, places or things, and therefore play the part of a noun in a sentence.

Gerunds are verbs that function as nouns. Sounds funny, right? They are a little funny because, at first glance, gerund examples appear to be verbs. In truth, they're acting as a noun. Here's an example:

In this sentence, "mind" is the verb and "borrowing" is a noun, the direct object of the sentence. Anytime you spot a word ending in -ing, pause and take a good look at its place in the sentence.

There are many types of nouns, each designed to serve a different purpose in a sentence. Test your knowledge with the practice items below.

Review the bold words in the sentences below and decide what type, or types, of noun each one is. Work through the questions on your own, then review the answers to see how you did.

Check your work using the answer key below.

Exploring Parts of Speech Beyond Nouns

Now that you know what the different types of nouns are, continue expanding your grammar expertise by getting to know other parts of speech. Once you've mastered nouns, the next logical step is to explore the different types of verbs. From there, you'll be ready to move on to discovering verb phrases and how to use them.