What Is a Noun? Explanation, Usage, and Examples 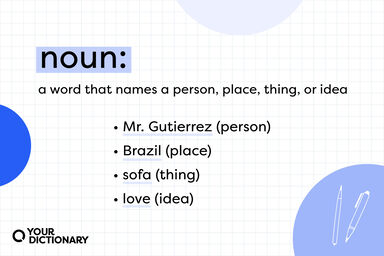 Nouns are one of the eight types of speech in the English language. They describe:

If you can see or touch it (like cat or banana) it’s a concrete noun. If it can’t be observed with the five senses (like love or sadness), it’s an abstract noun.

When a noun includes two words (such as birthday cake or hot dog), it’s a compound noun.

10 Examples of Nouns in Sentences

Seeing examples of nouns in action helps you better understand how to use the different types of nouns. Notice that if you substitute one noun with another noun, the sentences still make sense.

What Do Nouns Do?

Although there are many types of nouns, they all do the same things in a sentence. They name things, perform actions, receive actions, and even redefine other nouns.

All names of all things, such as people, cities, buildings, monuments, rivers, natural disasters, books, magazines, and songs, are nouns.

But when they’re naming something specific, they’re capitalized proper nouns.

In a sentence, one noun performs the action (or verb). This noun is the subject of the sentence. For example:

When a noun comes after the verb, the action is happening to the noun. These nouns are the second nouns in the sentences, and they’re known as sentence objects. For example:

When nouns follow helping verbs, typically forms of is, they’re known as complements. These nouns are also known as predicate nominatives.

Nouns can be singular (refers to one) or plural (refers to more than one).

Most English nouns can be made plural simply by adding an -s to the end of the word, but there are a few irregular plural nouns that are exceptions to that rule.

Using Nouns With Other Parts of Speech

When nouns aren’t naming things and performing verbs, they’re working with other parts of speech. Verbs, adjectives, pronouns, and articles work with nouns to make sentences as clear as possible.

When you need to describe a noun in more detail, use an adjective. Adjectives often come before the noun they’re describing, and depending which one you use, an adjective can change a lot about the noun.

In these examples, the adjective is in bold, and the noun it’s modifying is underlined.

You can replace a noun in a sentence with a pronoun. Replace subjects with subjective pronouns (such as I, you, he, she, it, or they).

Use an article before a noun to point out which one you're talking about. Indefinite articles (a or an) come before a general, nonspecific noun.

But when the definite article the comes before a noun, you’re talking about a specific noun.

Knowing what a noun is and knowing how to use one can be two different skills. See how much you’ve learned with some noun worksheets and noun quizzes.