What Is a Determiner?

In the English language, we use determiners to provide information about a noun or to introduce a noun. Learn about the different types of determiners through determiner examples. 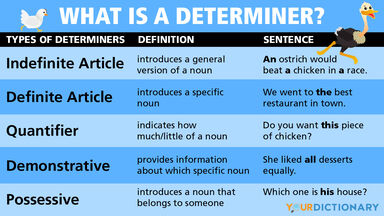 what is a determiner infographic
Advertisement

What is a determiner? Simply put, in English, a determiner is a word that introduces a noun or provides information about the quantity of a noun. It always comes before a noun, not after, and it also comes before any other adjectives used to describe the noun. Determiners are required before a singular noun but are optional when it comes to introducing plural nouns.

Consider the placement and usage of the common determiner the in the sentences below:

In every example, the determiner is placed before the noun or noun phrase, regardless of whether the noun in the subject or predicate.

There are four different types of determiners in English: articles, demonstratives, quantifiers, and possessives.

Articles are among the most common determiners. There are three singular articles: a, an and the. Articles specify (or determine) which noun the speaker is referring to.

In these examples, the sentence is talking about dogs or ostriches in general, meaning any dog. When your meaning is general, use an indefinite article.

On the other hand, the is a definite article, meaning the speaker is referring to a specific noun.

Here the speaker is referring to a particular dog and a particular restaurant. It's not a general category, but only one animal or place that's important. When your meaning is specific, use a definite article.

Demonstrative pronouns are also used as determiners in English. There are four of them: this, that, these, and those. Demonstratives are used in situations where the speaker can point to the item they mean, making them even more specific than a definite article.

This and that are singular while these and those are plural.

Quantifiers indicate how much or how little of the noun is being discussed. They include words such as all, few and many.

All can be used with other determiners to specify which particular items are meant (i.e. all the books in this pile). In this case, the quantifier always comes before the article or demonstrative. It's also possible to use all alone to refer to items generally, as in the second example.

As always, the determiner comes before the noun and any modifying adjectives. In English, you can use the same possessive whether the noun it references is singular or plural.

Once you learn the dictionary definition of each determiner as you study English vocabulary, it becomes easy to select the determiner that best expresses your meaning, whether you want to show ownership, quantity or relative location. Now that you have a solid grasp of determiners, take a look at what a conjunction is.