Ending a Sentence With a Preposition: Easy Guidelines 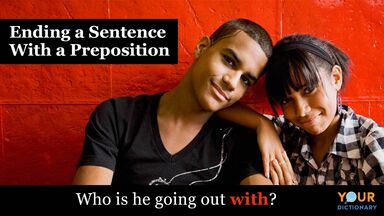 Ending a sentence with a preposition
Advertisement

Is It Okay to End a Sentence With a Preposition?

It’s most acceptable to end a sentence with a preposition in casual or informal writing. This phrasing is more conversational, and therefore more appropriate in this setting, especially in questions. For example:

Several English idioms and colloquial expressions end in prepositions. When you put the expressions at the end of a sentence, the sentence therefore ends in a preposition. For example:

When Should You Move the Preposition?

Prepositions form relationships between words (the object of the preposition) and other words in a sentence. They can show connections of location, time or ideas. Examples of prepositions at work include:

Splitting relative clauses is one of the most common ways to end a sentence with a preposition. They begin with relative pronouns (who, whom, that, which) and can function as the subject or object of a sentence. When they’re the object of the sentence, you can omit the pronoun — but this often results in a dangling preposition. For example:

Each of these sentences has a relative clause, but you can’t find it because the pronoun is missing. When you put the relative pronouns back, the preposition moves as well.

These new sentences sound more formal, but still correct. It’s worth adding the relative pronouns back to relative clauses in formal writing to make sure readers understand your meaning.

Adding relative pronouns in these sentences technically works, but they sound more awkward. (For example: “We have so much in our lives for which to be grateful” is correct, but doesn’t sound quite right). In formal writing, it’s best to rewrite the sentence and put the noun back after the preposition (“We are grateful for so much in our lives.”)

As with all passive writing, rewriting the sentence can clear up any doubt of grammatical correctness (“The game was called off” becomes “The game was canceled,” for example). But if you need to write in passive voice, be sure that you actually need to end the sentence in a preposition.

Many times, sentences end with a preposition because there are simply too many prepositions in it! These are the easiest sentences to edit. For example:

In these cases, you simply take out the last prepositions. The sentences still function in the same way.

Be Clear and Communicative in Your Writing

Like many grammar rules, the idea of avoiding prepositions at the ends of sentences is a rule you can break — if you know why you’re doing it. However, it may still be worth revising your sentences to avoid ending them with a preposition whenever possible if you wish to reduce the risk of controversy. Clear up any preposition misunderstandings with these tips on determining whether to use in or on in your writing.