What Is a Preposition? Explanation, Usage, and Examples 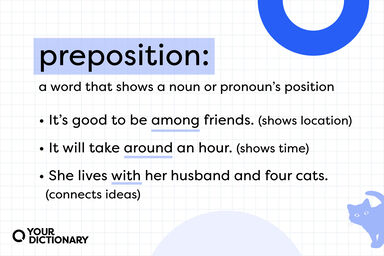 What Is a Preposition?

Prepositions are common words that show a noun or pronoun’s position.

You can identify a preposition by thinking about a mouse. In each sentence below, the bolded preposition connects the mouse to the other noun in the sentence.

There are four main ways to use prepositions in a sentence:

Most prepositions function in more than one way. For example, the preposition over can be used in all three ways:

There are several hundred prepositions in the English language, all of which are used to show a relationship between ideas. See how many you already know — and how many you haven’t used before.

What Is a Prepositional Phrase?

What Do Prepositions Do?

Prepositions describe relationships between other parts of speech. There are several ways to use different types of prepositions in a sentence — and depending on the context, a single preposition can function in many ways.

Many prepositions show a noun’s literal location in space (spatial relationships). Words like across, next to, and under can help a reader understand exactly where something or someone is.

Examples of prepositions that show location include:

While prepositions can’t show action (that’s a verb’s job), they can show movement by indicating a noun’s direction.

These prepositions are often confused with adverbs, which show where an action takes place. But unlike adverbs, prepositions use objects to complete their meaning.

You’ll also find that prepositions show connections between ideas (logical relationships). They connect two nouns that aren’t literally near each other but have another logical connection.

Once you’re comfortable with prepositions, you’ll notice (and use) them everywhere. Be prepared to use them properly by learning everything there is to know about prepositions and practicing using them.