6 Rules for Prepositions: Using Them Correctly

You need a license to drive a car, but for some reason, you don’t need a license to use prepositions. True, small relational words such as with, from, and over aren’t as dangerous as a two-ton vehicle, and using prepositions isn’t as complicated as parallel parking on a busy road. But just like studying a driver’s education manual, learning the rules for prepositions can help you get where you want to go — grammatically speaking. 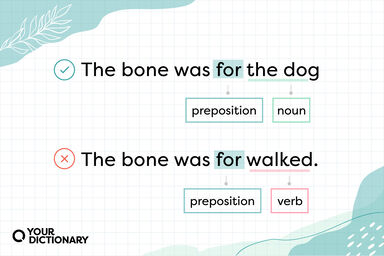 We use prepositions (such as in, between, on, through, around, etc.) to show a noun’s location, position, or direction. But different types of prepositions function in different ways, so make sure your preposition is saying what you want it to say.

Phrasal verbs (verb + preposition) are common in English writing and conversation. But they only make sense if you use the correct preposition with the initial verb.

3. Use an Object After a Preposition

A noun or pronoun (known as the object of the preposition) should always follow a preposition. Gerunds, which look like verbs but function as nouns, can also be objects of a preposition.

4. Avoid Using Prepositions at the End of Sentences

While ending a sentence with a preposition is generally acceptable in casual writing, it’s still frowned upon in formal writing. That’s because of Rule #3 — prepositions should have objects. If the preposition is at the end of a sentence, it won’t have an object.

In most cases, you can easily rewrite the sentence to avoid ending with a preposition or add an object of the preposition to clarify meaning.

A common grammar mistake is to replace have with of in a sentence, especially when using modal verbs such as should, could, and would.

People say of instead of have in these situations because they’re thinking of the contractions for would have (would’ve) or should have (should’ve) But you don’t need a preposition here because you’re not showing a noun’s position or location.

You need a helping verb (have) in these sentences.

6. Use Object Pronouns After Prepositions

Pronouns help you avoid repeating a noun in a sentence. However, they’re grammatically incorrect when you use subject pronouns (I, she, he, we, they, who) after a preposition.

Use object pronouns  — me, you, her, him, it, us, them, and whom — when they’re functioning as the object of a preposition. (You and it are the same in their subject and object forms.)

When In Doubt, Read It Out

Like driving a car, using prepositions gets easier with practice. If remembering the rules feels too complicated, just read your writing out loud. Chances are, you (or your spellchecker) will notice if you’re using in vs. within incorrectly, or if you really meant different from instead of different than. There’s no harm in checking your grammatical blind spots now and then.