There are several types of pronouns in the English language, each of which can be used to replace a noun in a sentence. Personal pronouns are the type that takes the place of specific nouns naming people, places and things. 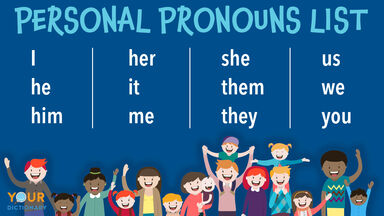 Personal pronouns are often used instead of repeating a name in multiple sentences that are close together. This can help avoid repetition and ease the flow of sentences. Review the complete list of personal pronouns below, presented in alphabetical order.

Writers and speakers usually inject personal pronouns into a sentence when the name of the noun has been previously mentioned. The reader or listener will still understand what is being referred to and the sentences sound less awkward. For example:

Richard bought a new laptop three months ago. He absolutely loves it.

Personal pronouns can be divided into singular and plural categories depending on the number of items they refer to. They can also be divided into first, second and third person points of view.

For many years, the words "they" and "them" were reserved only for plural usage. However, now these words can be used as singular personal pronouns. This reflects gender neutral usage.

When you replace a noun with a pronoun, the noun that is replaced is called the antecedent. The pronoun selected must agree with its antecedent. Paying close attention to the antecedent will help you choose the correct personal pronoun.

Choosing I vs. Me

Choosing between the subject pronoun "I" and the object pronoun "me" can be tricky. Review these examples to make sure you know when to use I or me in a sentence.

Now that you have reviewed this list of personal pronouns examples and have some ideas about how to use them correctly, use these pronoun review worksheets to see how strong your skills really are. Then, explore other types of pronouns. Next, reinforce what you have learned with these fun pronoun games.