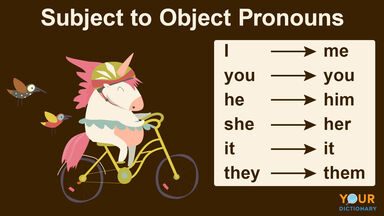 An object pronoun is a word that replaces a noun in a sentence. The noun it replaces can’t be the subject of the sentence. Instead, it replaces an object noun, which is a noun that received the action of a verb. Object pronouns are sometimes referred to as objective pronouns.

How to Identify an Object Noun

To identify an object noun, you’ll need to identify which noun mentioned in the sentence receives the action of the verb. Consider this example sentence:

Mary is the subject of the sentence. The predicate is "ate the ice cream." The verb is "ate," and "the ice cream" is the objective noun.

This sentence functions the same way as the first example sentence - except the word it functions as an object pronoun. Simply put, the pronoun is being affected in some way by the main noun, or the subject, of the sentence. Got the idea?

There is an important thing to note about the above example: it uses the word it. This is all fine and well, except that "it" can be a normal subject pronoun as well as an object pronoun.

In the first example sentence, "she" is a subject pronoun. In the second example, "her" seems to be talking about the same person, but is a pronoun in a different case. In other words, it is an object pronoun.

How to Make Object Pronouns

The sample paragraph below is broken out into numbered lines. The text contains several subject and object pronouns. See if you can point out the different pronouns and identify if they are subject pronouns or object pronouns. Review the answers below to check your work.

Identify the pronouns in each line and decide if each one is a subject pronoun or an object pronoun.

Check your work against the correct answers.

For this quick set of practice questions, think of the correct object pronoun to fit the blank.

Choose the correct object pronoun (me, you, him, her, it, them) for each of the following sentences.

Check your work against the correct answers.

Identifying and selecting subject and object pronouns in pre-written text can be a great way to practice your skills with these parts of speech, but it can be very helpful to use a variety of study strategies.

Object pronouns are an incredibly important part of the grammar in your everyday life. It is important to understand which pronouns are which, because it can help you understand the written language better. It’s also important to know how to use all of the other types of pronouns. Use this pronoun worksheet to practice your skills.