Pronoun agreement is a common problem for those who want to speak and write properly. Many languages handle pronouns differently than English, especially those with grammatical gender. Fortunately, with some information and tips, you can resolve these challenges. Learn what pronoun agreement is through example sentences. 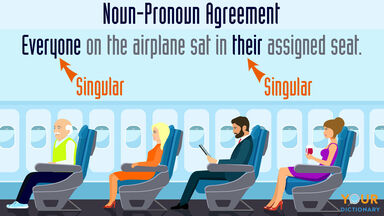 noun pronoun agreement everyone in their assigned seat
Advertisement

In most cases, a pronoun refers back to a noun that appeared previously in the sentence or conversation. This noun is called the antecedent of the pronoun, and the noun and pronoun must agree as to whether they are singular or plural. For example:

Amelia was going to buy her mother a bracelet. She went to a jewelry story.

Amelia is the antecedent of the pronoun. She is the pronoun. When using the pronoun she, the reader knows that means Amelia, without having to use Amelia's name over and over.

Typically, when it comes to gender, you use he for males and she for females. Historically, he was used as a gender neutral pronoun. However, this has gone out of style, as has using he/she or she/he. Instead, most style guides — including the AP Style Guide — now suggest the singular they is the best gender neutral pronoun. For example:

Everyone on the airplane sat in their assigned seat.

Regardless of the pronoun you use, you need to make sure it's still used appropriately as a singular or plural pronoun. If you don't know a person's pronoun preference, it's best to default to the singular use of they. Explore examples of gender and pronouns.

Definite pronouns are pronouns that replace words that have already been stated specifically in the sentence. There are two kinds of definite pronouns: personal and demonstrative.

She runs to her car for her notebook.

Since the pronoun is the singular she, the verb runs is also singular. View a few different singular and plural pronouns along with how they are used in a sentence.

Each and Every Pronoun Agreement

Other exceptions to the singular and plural rule are the words each and every. They are singular and make everything in the sentence singular as well. See this through examples.

One of the most important parts of noun-pronoun agreement is determining whether the noun being replaced is a subject or an object. In English, a subject is that which does the action, while the object is that to which the action is done.

In the case of a compound subject, each individual subject needs the subject form.

Object pronouns are him, her, me, us, them, whom, whomever, you, and it.

As with compound subjects, when using compound objects, each individual object requires the object pronoun.

Tips to Improve Your Writing

Certain structures tend to come up when dealing with pronoun-antecedent agreement. The following are some useful tricks to make those structures easier to parse.

One final tip: A pronoun refers to a noun and that relationship needs to be clear. Watch out for compound nouns so the pronoun does not confuse the reader.

Pronouns seem so simple. Most are short words, almost all are used regularly, and mastering them is one of the requirements of learning English. But, these little words can be deceptively tricky. For even more English nuance, check out our list of the most common grammar mistakes. It's always a good day to become less wrong!