What Is an Antecedent? An Explanation in Simple Terms 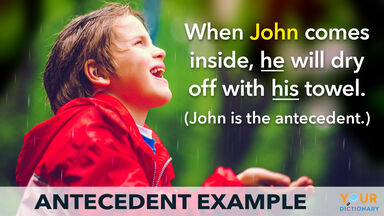 what is an antecedent example
Advertisement

What Is an Antecedent in Grammar?

The word antecedent refers to something that comes before, or precedes, something else. For example, especially in older or more formal English prose, people might refer to their ancestors or predecessors in a job as "my antecedents."

In grammar, the meaning of antecedent is more specific, as it refers to a word that comes before a different term that represents the original word. In the sentence, "When John went out in the rain, he got wet," John is the subject of the sentence, as well as the antecedent to the pronoun "he."

It's important to understand the relationship between pronouns and antecedents. Compare the two sentences below to get a sense of how substituting a pronoun for an antecedent can improve a sentence.

Antecedents for Nouns or Noun Phrases

Pronouns aren't the only option for replacing antecedents with other terms. Different nouns or noun phrases can also be used.

An antecedent and the word that replaces it must agree in number. If the antecedent is singular, then the pronoun that takes its place must also be singular.

When a singular indefinite pronoun is used as an antecedent, the word that replaces it must also be singular. For example, "everything" is singular, so it would be correct to say "Everything here has its own box." The examples of indefinite pronouns listed below are singular.

Other pronouns that must be considered this way include all, any, none, and some.

From Antecedents to Predicate Nouns

Now that you know the answer to the question of "What is an antecedent?" you're ready to move on to even more advanced grammar topics. From here, take the time to learn about predicate nouns, which are nouns or phrases that connect to antecedents by linking verbs. Once you have a basic understanding of that concept, deepen your knowledge by reviewing examples of predicate nouns in sentences.