What Is a Pronoun? Types, Definition, and Examples

Pronouns replace nouns in a sentence. But these little words have big responsibilities — pronouns can name people or things, show ownership, ask questions, reciprocate meaning, and much more. 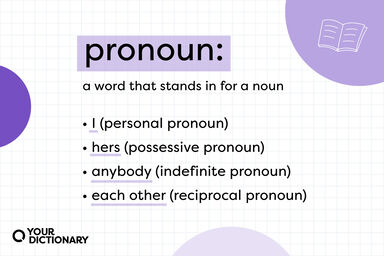 Book icon With Pronoun Definition and List of Examples
Advertisement

What Is a Pronoun?

A pronoun is one of the eight main parts of speech. The word pronoun means “on behalf of a noun,” meaning that it stands in for a noun (the antecedent) to avoid repetitive nouns in writing. For example:

Matching a pronoun with its antecedent is called noun-pronoun agreement. Make sure you’re choosing the correct pronoun based on the noun it’s replacing.

To know which pronoun you need, determine whether the noun you’re replacing is singular or plural, and if it’s referring to a first-person, second-person, or third-person noun.

Then you can use a list of pronouns to find the right options.

*The personal pronouns you use depend on the context of a sentence and a person's preferred pronouns. Many style guides now have guidance on using they/them as singular pronouns.

What Are the 9 Different Types of Pronouns?

Replacing nouns is just one part of a pronoun’s job. Depending on the type of pronoun, there’s a lot more for them to do in a sentence.

Personal pronouns substitute a person's name. They can also substitute any third-person noun in a sentence.

Subject pronouns (I, you, he, she, it, we, they) function as the subject of a sentence.

Object pronouns (me, you, him, her, it, us, them) replace the name of the object of a sentence.

Possessive determiners (my, your, her, his, its, our, their) come before a noun to modify it, just like an adjective.

The two possessive pronouns that are the same in both cases are his and its — the words are spelled the same no matter how you use them as a pronoun (with no apostrophe in its).

Some indefinite pronouns (all, any, more, most, none, some, such) function as both singular and plural.

Most indefinite pronouns work whether the noun comes before the pronoun or not. However, clarifying the noun in the previous sentence may help with any misunderstanding.

Relative pronouns connect a clause or phrase to a noun or pronoun. They add more information to a sentence.

Definite relative pronouns (who, whom, which, whose, that) refer to a specific noun, and are the first word in a noun clause.

Interrogative pronouns (who, whom, which, what, whose, whoever, whomever, whichever, whatever) have the same form as relative pronouns, but they ask a question.

It may seem like there are words missing from this list, such as where and why. However, they are not interrogative pronouns — they are adverbs that describe more about verbs.

Reflexive pronouns replace the object of a sentence when it refers to the same person or item in the subject. Singular reflexive pronouns end in -self ((myself, yourself, himself, herself, itself, themself, theirself).

Plural reflexive pronouns end in -selves (yourselves, ourselves, themselves).

If you replace these pronouns with the nouns in the sentence, they are still correct, but they're more awkward. "Nadine taught Nadine Spanish" is more confusing to read than "Nadine taught herself Spanish."

Demonstrative pronouns indicate specific nouns. They can be singular (this, that, such, none, neither).

Demonstrative pronouns can also be plural (these, those).

When you're using each other or one another as a possessive pronoun (as in "We opened each other's presents"), treat it as a singular noun and add an apostrophe and "S," not an "S" and apostrophe as you would with a plural possessive noun.

Now that you know all the different types of pronouns, practice using them with these helpful resources for reinforcing pronoun skills in your writing.