What Is a Demonstrative Pronoun? 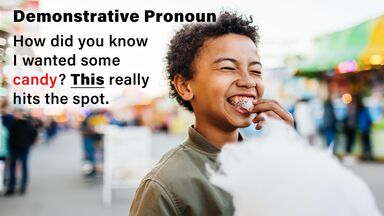 A pronoun is a word that is used instead of a noun in a sentence. A demonstrative pronoun is a specific type of pronoun.

There are not many demonstrative pronouns in the English language, but their usage is common in spoken communication and writing.

Example: "Raindrops on roses and whiskers on kittens, bright copper kettles and warm woolen mittens, brown paper packages tied up with strings - these are a few of my favorite things."

Example: They make you wear rented shoes, you always smell bad when you leave, my thumb nail always breaks off, and I'm not good at it. That is why I hate bowling.

To illustrate, review some demonstrative adjectives that modify underlined nouns:

Which to Use: This, That, These, or Those?

Whether being used as a demonstrative pronoun or a demonstrative adjective, the words this, that, these, and those can be a bit confusing for speakers and writers. This and that are singular, while these and those are plural. That’s not the part that people usually find confusing. The difficult part lies with selecting which singular or plural pronoun is the right one. The answer lies with distance.

Test your expertise by completing the following activity. Answer the questions without peeking ahead to see the answers. Once you have finished, check your work to see how you did!

Did you properly identify all the demonstrative pronouns?

Another Way to Represent a Noun

A demonstrative pronoun just represents a noun that has already been brought up, without actually repeating the noun itself. It is a single demonstrative word that takes the place of a noun, a noun phrase, a string of noun phrases, an activity, or a situation. Whether used in written language or conversation, demonstrative pronouns help people get their point across while minimizing repetition of the same noun over and over again. To further expand your knowledge of correct pronoun usage, discover the rules for pronoun agreement.