What Is a Singular Pronoun?

Understanding singular pronouns is important so you can make sure that there is agreement between the subject and verb or the pronoun and antecedent in a sentence. If one is singular, the other must be singular too. 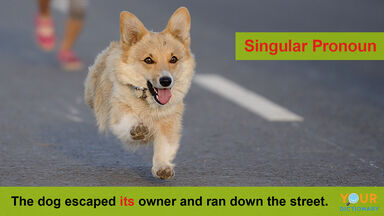 All pronouns are words that take the place of nouns. The prefix "pro" means "for," so a pronoun is "for a noun." This allows the text to flow better and not be filled with repetitions of nouns.

Some pronouns are designed to reflect singular situations, and some reflect plural situations. Singular pronouns represent singular nouns. Any time you need to use a pronoun to replace a noun, consider whether the noun is plural or singular. If it is singular, it should be replaced with a singular pronoun.

It is important to understand which pronouns are singular so that you are successful in using a singular pronoun when the word it is replacing in the sentence (the antecedent) is singular. Here is a singular pronouns list for each of the types of pronouns.

Here are some examples that show the relationship between the singular pronoun and its antecedent.

There are certain situations and some words that can be bothersome when trying to make pronouns and their antecedents agree. Keep the following tips in mind.

Ignore Other Words Between the Antecedent and Pronoun

Sometimes there are a lot of words and phrases between the antecedent and the pronoun, so you need to ignore those extra words and focus on the words that need to agree.

Know That Groups Can Sometimes Be Singular

Other times, the subject is referring to a group of people or things. In this case, the group is treated as singular.

A compound subject will need a singular pronoun if the words "or" or "nor" are joining the subjects. If this is the case, the subject that is closer to the pronoun is the one the pronoun must agree with.

Some Indefinite Pronouns Are Singular

The following indefinite pronouns are singular and, if used as antecedents, would require a singular pronoun. They are: no one, nothing, nobody, anyone, anything, anybody, someone, something, somebody, everyone, everything, everybody, one, each, either, and neither.

Understanding the grammar rules for using singular pronouns is key to making sure the pronoun and the antecedent agree. To test your skills and get some extra practice, try some fun pronoun activities.